a piece of K

2 Apr 2016
-BLOG- In our previous blog, you witnessed the intensive and successful search for the correct colour for the conservation of K-piece by artist Mark di Suvero. On 19 October 2015, the conservation work began when the work was disassembled and taken to the paint-shop in sections. By now, the sculpture already stands gleaming again in our front garden. Below, we take you through the conservation work step by step.

The old paint layer of K-piece is removed using a sandblasting technique in a sealed room at the paint-shop. In this technique, tiny grains of grit are blown against the surface with great force. The abrasive effect removes the paint layer. The old paint layers were, however, retained in two places. Thus it remains possible in future to trace the treatment history of the past 44 years.

After the old paint layers are removed, a new coat can be applied. The paint used is a car paint, composed of 6 different layers. This composition provides good protection of the metal surface against corrosion. For a nice even result, the paint is guned onto the surface with a spray gun.

Picking up the pieces

The freshly painted elements of K-piece are collected early in the morning on 16 November. The separate sections are loaded onto a lorry with a forklift truck. Very carefully, as the new paint layer must absolutely not be damaged. During transportation, pieces of carpet are used to protect the sections against bumps.

Upon arriving at the museum, all the separate parts of K-piece are laid on the grass like puzzle pieces. The surface is thoroughly cleaned once again. Subsequently, the parts are reassembled with a crane and bolted together. When all the parts are secured, the letter K is formed again and the work as a whole can be hoisted upright with the crane.

The last remaining task is to retouch the nearly 100 bolts. The result: a piece of K!

Many people helped us to carry out the research and the treatment. Thus, we wish to thank the following individuals and organizations:

Fig. 1 Removal of the old paint layer
Fig. 2 A beam of K-piece with the paint layer partly removed
Fig. 3 Spraying the new paint
Fig. 4 The painted sections of K-piece
Fig. 5 Moving the sections with a forklift truck
Fig. 6 The sections are placed on an open lorry
Fig. 7 The parts are laid on the grass at the museum with a crane
Fig. 8 The letter K is hoisted upright with a crane
Fig. 9 The bolts are painted
Fig. 10 K-piece after conservation work 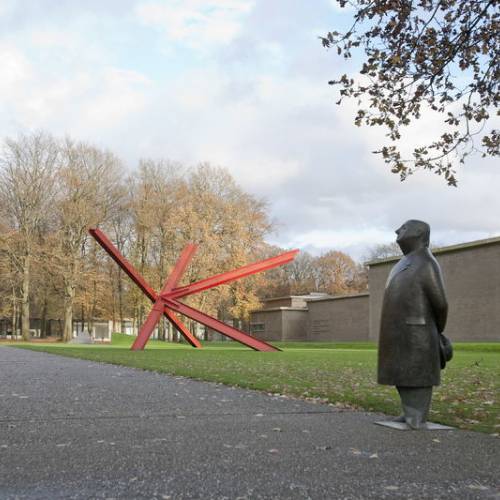 Read the first blog about the search for the right paint system for the conservation of K-piece.