31 Oct 2014
-BLOG- In the exhibition Sufficient Force, the Kröller-Müller Museum shows American art from the 1960s. An era that has since become legendary. The refrigerator, washing machine, television and car make their debut in the household and in the streetscape. The space race between the United States and the Soviet Union culminates in the first moon landing. The skirts become shorter, the hair longer and women emancipate themselves in a pantsuit and with the pill in their pockets. 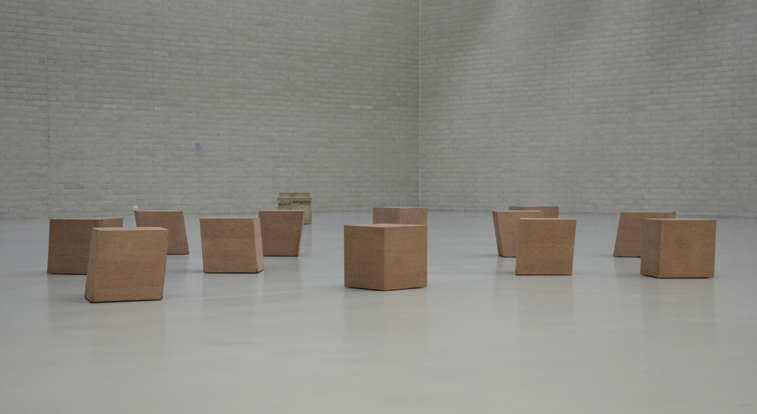 The extreme desire for change during this decade reaches its climax in 1968, with the mass student protests that begin in Paris, which are directed against the old society and traditional norms and values. An age of disobedience. On the Veluwe, far from the urban unrest, the Kröller-Müller Museum showed itself duly aware of the zeitgeist. With considerable courage, a whole range of entirely new conceptions, forms, materials and techniques in visual art were introduced to the museum. Minimal art and conceptual art, which is no longer about the traditional expressions of beauty or individual emotions. It’s not even about art, but about an imagined new society and the position of art therein. The time-honoured values of order, regularity, hierarchy and organization had no place in the new era. This called for an art that was also no longer hierarchical and that employs a staggeringly simple visual language: a set of white ‘boxes’, neon tubes or a row of plastic pipes leaning against the wall.

In contrast to the new household appliances from the nineteen sixties, the art from that time is still not commonplace. As with much minimal, abstract art, it doesn’t come to you as a matter of course. You have to engage with it. Nevertheless, the art now on display at the Kröller-Müller gives the observer a lot of space. Entirely consistent with the non-hierarchical way of thinking, the artist does not want to be all-determining. The work of art has not a single predetermined image, but a constantly changing appearance, depending on the position and movement of the observer. Diamond mind II by Bruce Nauman, lying almost abandoned in the museum’s large sculpture room, sets the feet and mind of the visitor in motion. He is free to move between the twelve rhombic sandstone blocks that are placed on the floor in concentric circles. This creates a visual game, in which the rhomboids appear to transform into cubes and back again. This may seem like a practical exercise in geometry, but there is also poetry in the notes that Nauman gave to the work: Circle of Tears. Fallen all around me. Fallen Mind. Mindless Tears. Cut like a Diamond. You keep walking in circles.