Auguste Renoir made this large painting on commission for the owner of the café of Cirque d’Hiver, the winter circus in Paris. The clown in the middle of the ring is the then famous John Price, who performed together with his brother William as ‘clown-musiciens’. He entertained the Parisian public by, among other things, playing the violin while standing on a shaky chair.

The clown’s dark costume with large embroidered butterflies and red sleeves and stockings creates a sharp contrast with the yellow sand of the ring and the white of the low, curved wall and the chair. His fixed pose creates an atmosphere of tension. Having stopped playing, he stares straight ahead as if hypnotized.

The clown dates from Renoir’s novice years, when he made large, detailed portraits that often cover the entire canvas. He only developed his well-known impressionist style in 1869. Then he created the paintings for which he became world-renowned: the images of Paris and its surroundings, the crowded parks and cafes, the portraits and the nudes. 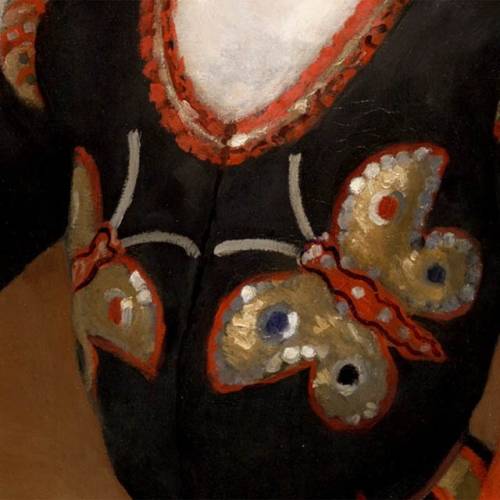