Barbara Hepworth: Sculpture for a Modern World places emphasis on the prominent role that Hepworth played in the international art world and the context in which her work was created and presented, from the studio to the landscape. The exhibition includes approximately one hundred works, about seventy of which are by Hepworth and the rest by other artists. It also includes a large amount of new documentary material from the recently opened Hepworth archive.

The exhibition follows Hepworth’s career from her oldest preserved sculptures from the nineteen twenties: abstracted figures carved from marble and local English stone. These early sculptures are shown alongside work by her predecessors and contemporaries, from Jacob Epstein to Henry Moore.

In 1930, Hepworth met her second husband Ben Nicholson, with whom she collaborated closely. Large sculptures from this period are on display, together with paintings, prints and drawings by Nicholson and rarely shown work by Hepworth, including fabric designs, drawings, collages and photograms. Photographs of the two artists with their work in their studio in London’s Hampstead give a picture of their life together, in which professional and private aspects were inextricably linked.

In the nineteen thirties, Hepworth and Nicholson visited the studios of Picasso, Braque, Arp and Brancusi. Partly influenced by these contacts, Hepworth began making abstract work in the nineteen thirties. From 1933 on, she started creating her characteristic organic forms, in which she pierces and literally breaks open the closed form and allows the space to play an equal role. Works from this period are presented together with publications in which Hepworth’s sculptures are shown alongside work by artists such as Alberto Giacometti and Piet Mondriaan.

In 1939, Hepworth moved to St Ives in Cornwall. The landscape then became a central theme in her work. A highlight of Hepworth’s carving career are the large sculptures made of expensive African Guarea wood, four of which – from the years 1954-1955 – are brought together in the exhibition.

The nineteen sixties: Hepworth and the Rietveld pavilion

The special relationship between the Kröller-Müller Museum and Barbara Hepworth is visible to this day in the Rietveld pavilion, where eight of her bronze sculptures are on display. These were specially selected in the sixties for this pavilion designed by Gerrit Rietveld for the Sonsbeek ’55 exhibition. The pavilion was rebuilt in the sculpture garden in the years 1964-1965 and inaugurated with Hepworth’s exhibition.

Barbara Hepworth: Sculpture for a Modern World is curated by Tate Britain in London (from 24 June to 25 October 2015). After Otterlo, the exhibition will travel on to the Arp Museum Bahnhof Rolandseck in Remagen (22 May to 28 August 2016).

This exhibition has been made possible through:

Photo: Rietveld pavilion in the sculpture garden of the Kröller-Müller Museum, with works by Barbara Hepworth (photo: Marjon Gemmeke) 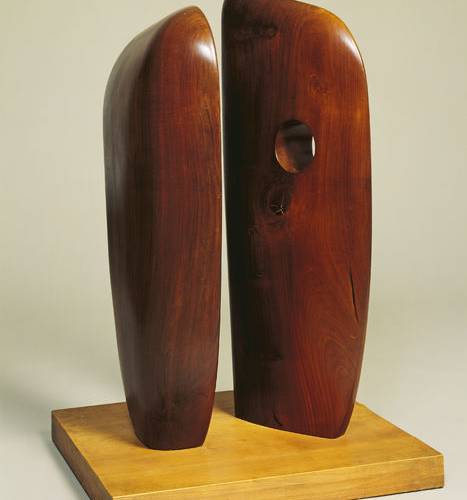