19 Sep 2019
In June and July, three post-master students from the Metals Conservation Department of the University of Amsterdam took on a summer project at the Kröller-Müller Museum. It was supervised by the museums sculpture conservators. The aim of the project was to carry out research and maintenance work on three large steel sculptures in our sculpture garden.

Conservation of our corten steel sculptures

Weathering steel (corten) corrodes in a humid environment from bare metal to a brownish rough surface. Even though we know this type of steel is quite stable in outdoor conditions, some processes can influence the looks and the structural condition of the artwork. We also looked at the manufacturing of the sculptures, together with the installation process so we could better understand what these processes are. 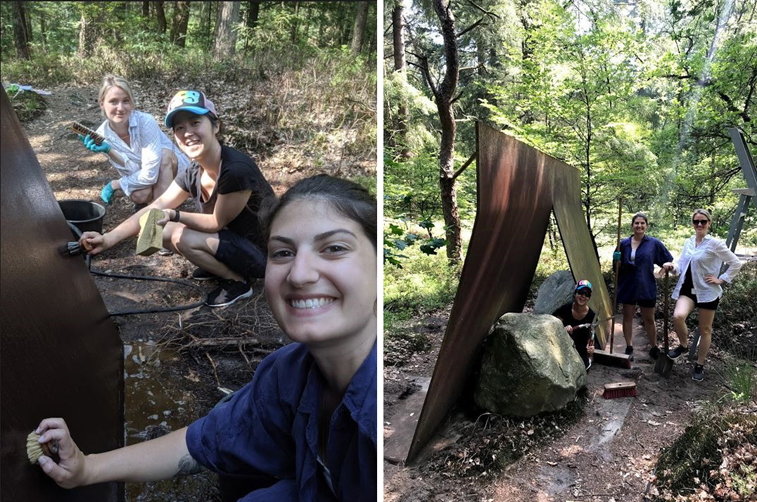 We started with Lee Ufan's Relatum (1979). First we had to remove the soil, moss and dried leaves that were covering the lower part of the metal sheet, but we also had to cut back roots of plants on the concrete base. We removed algae and moss from the metal and stones with warm soapy water by brushing the surface with soft natural bristles and hard brushes made of coconut. The surface underneath was still in a quite good condition. After having cleaned everything questions arose whether the stones were still in the right position in relation to the steel plate.

What is happening above and under the soil

You can see in the photos below that corrosion occurred on the lower part of the three large steel plates of Richard Serra's Spin-Out, for Robert Smithson (1972), resulting in loss of the original material. This is caused by constant erosion and a higher concentration of moss at the interface between the soil and the air. We carefully removed moss and corrosion products of the surface and cleaned the whole plates using soapy water and rinsing them afterwards with low pressured warm water.

The area of the metal plate under the soil remained unchanged by the natural weathering process of corten steel and shows us how the work looked 37 years ago.

Cleaning and checking 25 m of welds

Then View (2001), a huge sculpture by R.W. van de Wint, high up on a hill, was given a condition and safety check. In order to look at the condition of the welds that join the 10-meter tall, vertical “petals” to the base, we had to dig out the lower part of the sculpture.

With a lot of help from the museum staff we removed most of the sand to reveal the edges of the base plates. Also here corrosion products have formed at the bottom part, but as the soil here is mainly sandy moss had no chance to grow as much as at the artworks in the forest. The 25 m of welds had to be cleaned with steel wire brushes. Even though it looked like the welds were in good condition, it was still necessary to look closely and search for microcracks or other damages. We luckily found that the sculpture was in good condition and that, for now, the joints did not need our further attention.

We learned a lot about the conservation issues of large corten steel sculptures in an outdoor environment. It became clear that as a conservator you have to work very interdisciplinary. By now these three works are very well documented in their condition and manufacturing process. While digging deeper more question arose and interviews with the artists Serra and Lee Ufan and the sons of Van de Wint are planned in the future.