28 May 2016 - 13 Nov 2016
Pondering nature while in the midst of nature is part of the Kröller-Müller Museum. Not only due to the beautiful location in the Veluwe, but also through the large collection of work by artists with different conceptions of time and space and their relationship to nature.

Pierre Huyghe in the sculpture garden

In the sculpture garden, for the first time in years, a large-scale intervention by an artist has been taking shape. La Saison des Fêtes by Pierre Huyghe consists of a circular garden set in a landscape of sand hills. The original terrain has almost completely disappeared under the 3300 m³ of sand that was brought in for this. In the garden everything revolves around plants, which relate to festivals from all over the world. There are around 45 species of plants; annuals and perennials, bulbs, shrubs and trees, with an eye-catching palm tree among the sand hills. With the flowering of the various plants, the festivals, seasons and months of the years become topical time and again. 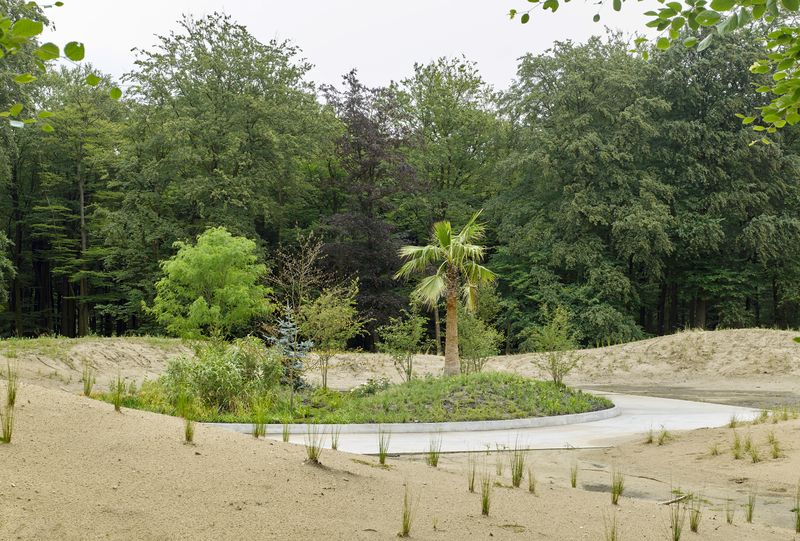 The work of Pierre Huyghe assumes very different forms: from objects, photographs, drawings, films and music to living organisms. La Saison des Fêtes is a self-generating system, for which the artist provided the impetus, but which then continues to develop.

In this time-laps you see the see the garden being laid out.

To mark the opening of this garden, the exhibition Nature based is presented in the museum, with (video) work by very diverse artists. The presentation features Pierre Huyghe’s films Streamside Day (2003) and Untitled (Human Mask) (2014). Oscar Santillan’s Accompaniment (2012) and The Manifesto of Goodness (2012) are included. And the film Establishing Eden (2016) by Persijn Broersen and Margit Lukács is also showing.