In the second half of the 19th century, more than 70,000 soldiers of the Royal Netherlands East Indies Army (KNIL) left for the Dutch East Indies. This detachment of KNIL soldiers walks across the Koningsbrug in Rotterdam, ready to embark on their journey. The woman holding the child’s hand and wishing her husband farewell does lend some drama to the scene, but Isaac Israels is more interested in providing an objective representation than eliciting an emotional response.

Isaac is the son of Jozef Israëls, one of the most important artists of The Hague School. This art movement is characterized by the depiction of realistic Dutch landscapes in grey, dark tints. Isaac is only 18 when he paints Transport of colonial soldiers. In this monumental, dark and detailed work, he still appears influenced by the work of his father.

But he soon develops a style of his own. His technique becomes more fluent and fleeting and he starts concentrating on the rapid rendering of his subjects. He is therefore regarded a Dutch representative of impressionism. 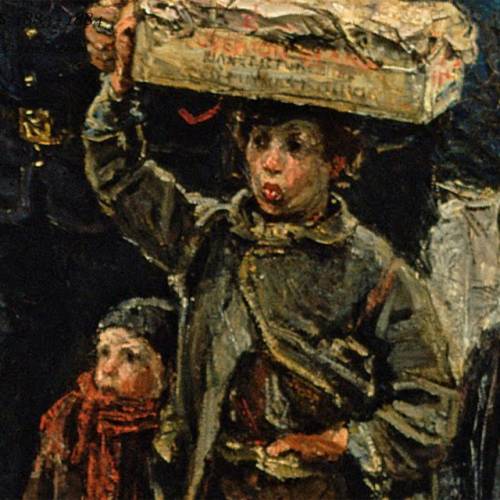