Jean Arp is not only active as a sculptor, but equally as a painter, jewellery designer and poet. The latter explains the often poetic titles that he gives to his sculptures, such as this Cloud shepherd.

Nevertheless, no human figure is discernible in this sculpture. The large organic form with rounded, wavy protrusions is more reminiscent of a strange, budding fruit. The shiny surface reflects the trees, the grass and the ever-changing skies. It is likely that Arp only named the work later, thereby creating a connection with the sky above.

Arp does not call his sculptures ‘abstract’, but indeed ‘concrete’, because they stand in the space as actual, real objects. In his view, they germinate and grow in the human mind, analogous to the processes of growth in nature. It is the task of the artist – in an unconscious, intuitive process – to create autonomous forms, which are certainly related to nature, but that have their own existence and meaning. 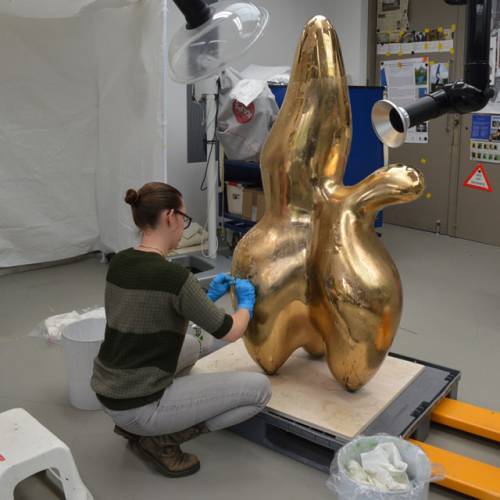 Read the blog about the conservation of Cloud Shepherd.