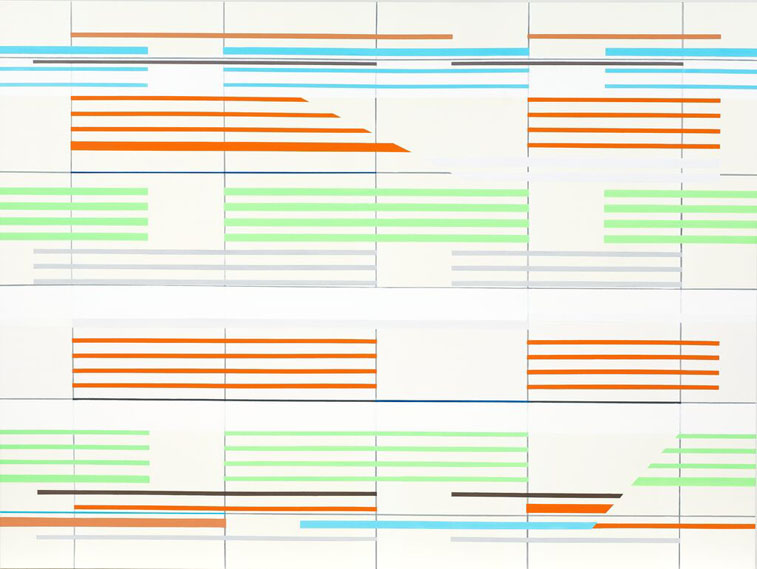 The paintings of José Heerkens are all about colour. On her canvases, she arranges precisely coordinated colours along lines and in grids. Heerkens often leaves part of the linen unpainted to ensure that the work remains ‘open enough to enter’, as she herself says. You can almost get inside the painting by allowing your eye to ‘wander’ through the canvas, past staggered areas of colour, the rhythm of lines, compactions in the paint layer and interruptions in the brushstroke.

The paintings are translations of impressions that Heerkens gained in the surroundings of her studio, but also on her travels to Iceland, the United States, Australia, or Latvia. The spatial experiences of the magnificent landscapes are conveyed in the titles for series, such as Pilgrimage or Five Colour Walk. The rhythm of the lines and colours in the painting 2015 – L33. Written Colours inspired clarinettist Peter Koetsveld to create an improvisation that can be heard alongside the painting.

Continuous process
Heerkens often works for years to create her series, which she calls ‘concepts’. Colour – Free and Connected brings together 34 paintings from a variety of those ‘concepts’. Sometimes she works on several paintings simultaneously and sometimes a series lies dormant for an extended period of time. It is a continuous process of looking, feeling, thinking and the act of painting itself. She is guided by what happens on the canvas. Every decision and action creates a small turning point in the work, to which she, as a painter, must then react again.

Colour – Free and Connected is accompanied by a publication with the same title, featuring texts by Wita Noack, director of the Mies van der Rohe Haus in Berlin, and publicist and curator Jurriaan Benschop, and designed by Irma Boom.

Jose Heerkens. Colour – Free and Connected is the third exhibition in the series With paint. In this series the Kröller-Müller Museum presents the work of contemporary painters who deliberately reflect on the art-historical tradition in their work. Steven Aalders (Middelburg, 1959) inaugurated the series in 2021-2022 with the exhibition Seasons. The work of Klaas Kloosterboer (Zuid- en Noord-Schermer, 1959) was shown in 2022 in The rules and the game. Heerkens will be followed by an exhibition of Paul Drissen (Oirsbeek, 1963) in the summer.