Oleksandr Bohomazov is among the Russian avant-garde. Like many artists of his generation, he works in many different styles consecutively, such as symbolism, pointillism and fauvism. His work from the period between 1913 and 1915 is purely futurist and coincides with the heyday of Italian futurism, of which he is familiar through publications.

In 1915, financial hardship forces Bohomazov to leave his home in Kyiv to work as a teacher in the Armenian town of Goris in the Lesser Caucasus. He is impressed by the mountains, which he likens to a ‘gigantic funnel where grandiose volumes twisted, crashed and collided’.

A productive period ensues. Bohomazov makes countless paintings and drawings of the Caucasus, including this panoramic Landscape and Memories of the Caucasus, a synthesis of his impressions. Despite the originality and high quality of his work, he remains a ‘great unknown’ in the West until 1973, when his work is included in an exhibition in London for the first time.

Memories of the Caucasus 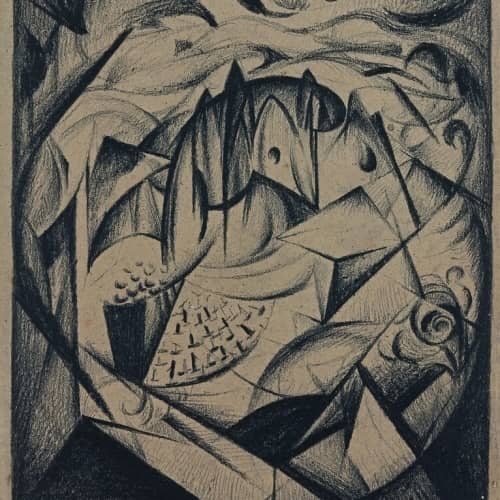 Go to Bogomazov's work Memories of the Caucasus.