Composition 10 in black and white

In 1914, Piet Mondriaan lived for some time in the seaside resorts of Domburg and Scheveningen. There he made a series of drawings inspired by the sea and the breakwaters. Based on these drawings, in 1915 he created Composition 10 in black and white, sometimes called Pier and Ocean. The painting is the first in which Mondriaan uses exclusively black and white.

Composition 10 in black and white is an abstract, elliptical composition of short, horizontal and vertical black lines. The rolling waves can be seen in the long, straight horizontals in the middle of the painting, while the abstraction of a breakwater is recognizable in the vertical lines at the bottom of the painting.

Although the starting point of the painting is still the visible reality, it is clear that Mondriaan is no longer interested in the recognizable representation of nature. He is mainly concerned with the bringing together of opposites, the horizontal and vertical, to thereby express a general idea of harmony and rhythm.

Inspired by this painting, FALT wrote the song Offshore for the music competition Art Rocks. With this soundtrack they reached the final in Paradiso. One of the prizes for the semi-finalists was a video clip. You can see the result below. More information on Art Rocks 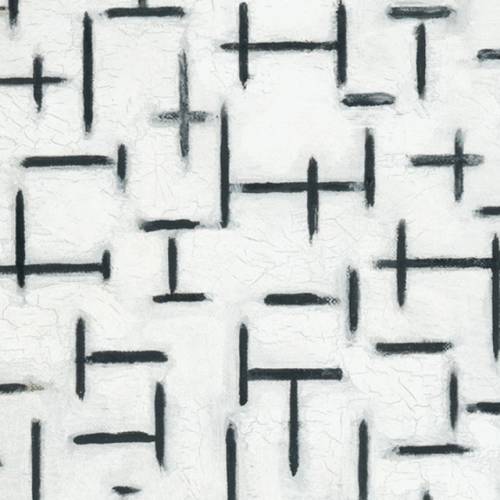