Surprises at a presentation of masterpieces

1 May 2013
-BLOG- On the occasion of its seventy-fifth anniversary, the Kröller-Müller Museum has announced its own Top 75. The selected masterpieces are on display throughout the entire museum and in the sculpture garden, partly as a component of the permanent display, partly in a special jubilee presentation. 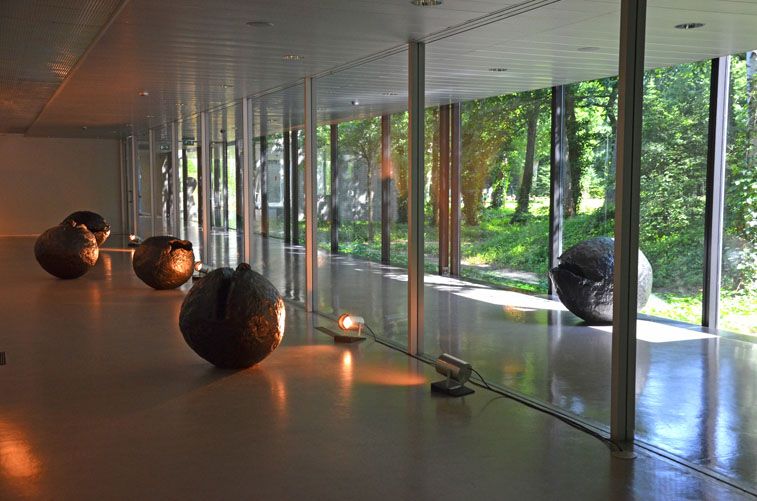 Brought back to life

Every ‘best of’ includes some familiar works and that also certainly applies to the Kröller-Müller. The museum’s masterpieces often enjoy worldwide renown. Hence, the Van Goghs, the Picassos and the Mondriaans are rather obvious choices. But there are also surprises. For instance, a monumental work by Donald Judd, which had been dismantled and in storage for decades, has been carefully reassembled, cleaned and brought back to life, as it were. More than twenty-five years after their creation, the six ‘boxes’, each over two and a half metres in height, width and depth, are still a spectacular sight. Many visitors will see this work for the first time now.

That is not the case with Concetto spaziale ‘Natura’ by Lucio Fontana, which has stood in the sculpture garden since 1966. The five rough bronze spheres, each of which contains a split that occasionally resembles a mouth, are rather like little monsters. The splits correspond to the sharp knife cuts that Fontana made in his canvases, to disrupt the illusion of the painting and literally break it open. Before their acquisition by the Kröller-Müller, the bronze spheres were exhibited at the Stedelijk Museum in Amsterdam in a very different presentation: in semidarkness with a bright skimming light from one direction, just above the floor. This theatrical presentation was conceived by Fontana as an expression of his ideas on ‘spazialismo’: ‘I want to open up the space, provide art a new dimension and connect it to the cosmos, which is endlessly expanding.’

From the outside to the indoors

In order to once again allow the popular work from the sculpture garden to be experienced in this way, the five bronze spheres have been brought indoors. Experiments were conducted with the lighting, whereby a bright, white light proved to be the best. In the semidarkness of the print room, this light now skims across the underside of four of the five bronze objects, casting sharp shadows on the wall. The fifth stands in the corridor in front of the print room, like a sentry, drawing the visitors’ attention to this extraordinary spectacle.