Composition I (still life) from 1916 consists largely of tight horizontal and vertical lines and overlapping circles. The objects of the still life are barely recognizable, except for a lemon at the bottom of the canvas. The painting seems primarily an experiment with geometric shapes, with the warm colours as a counterbalance, which express a certain connotation.

A year later, in 1917, Van Doesburg established the magazine De Stijl in which he brought together likeminded artists, architects and designers, such as Piet Mondriaan, Bart van der Leck, Vilmos Huszár, Gerrit Rietveld, J.J.P. Oud and Robert van ’t Hof. In these years, they develop entirely new ideas about art and the function thereof.

Van Doesburg’s aim was to achieve a synthesis between art and life, in which science and technology also play a role. As an artist of his time, he felt obliged to contribute to the creation of a better society. 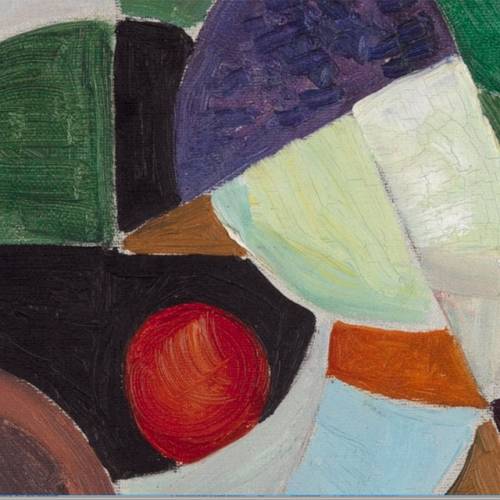