Country road in Provence by night

For Van Gogh, the cypress is the ultimate symbol of Provence. ‘The cypresses still preoccupy me’, he writes to his brother Theo, ‘I’d like to do something with them like the canvases of the sunflowers, because it astonishes me that no one has yet done them as I see them. It’s beautiful as regards lines and proportions, like an Egyptian obelisk. And the green has such a distinguished quality’.

Van Gogh paints Country road in Provence by night shortly before leaving the asylum at Saint-Rémy. This is not an existing landscape, but instead composed at his own discretion, presumably as a final reminder of Saint-Rémy and as a summary of the many impressions he acquired during his stay in Provence.

Van Gogh experiments with his use of colour and brushwork in Saint-Rémy. Many works are composed of graceful forms and swirling lines. That is also the case here. The short, rhythmic wavy brushstrokes placed side by side give the painting great dynamism.

Listen to background story in the Podcatcher audio tour 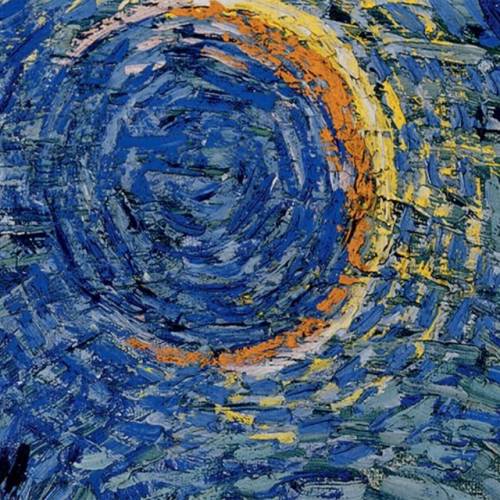