When the fruit trees in Arles are in bloom in the spring of 1888, Van Gogh paints them nearly every day. Thus, in a short period he produces fourteen paintings and several drawings and sketches of the blossoming trees. He considers Pink peach trees one of the most successful in the series.

In the evening of the day on which Van Gogh makes this painting, he finds a letter from his sister, who writes to tell him that Anton Mauve has died. This painter was not only his cousin by marriage; he also taught him to paint in oils and watercolour. Van Gogh decides to dedicate the work to him.

He writes to his brother Theo that he was moved and affected by the news, ‘and I wrote on my painting Souvenir de Mauve Vincent & Theo and if you think it’s good as it stands we’ll send it to Mrs Mauve in both our names. (...) It seemed to me that in memory of Mauve we needed something that was both tender and very cheerful and not a study in a more serious key than that’. 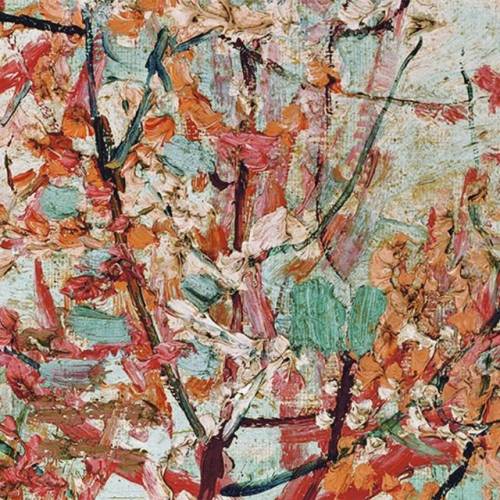