Still life with a plate of onions

Van Gogh rents the Yellow House in Arles and invites Paul Gauguin to come and work with him there. But they soon have disagreements. After a heated argument Van Gogh becomes disoriented and cuts off his own left ear. He is admitted to the hospital in Arles and discharged on 7 January 1889.

On that day, he writes to his brother Theo that he intends to start working on two still lifes the following day, to ‘get used to painting again’. One of these is Still life with a plate of onions, painted in contrasting colours. The drawing board consists of almost horizontal brushstrokes, while the background is composed of vertical brushstrokes.

The objects indicate that Van Gogh has picked up the routine of everyday life again: the letter from Theo, the plate of onions, the pipe with tobacco, the bottle of wine or absinth, the pot of coffee, the calendar with the burning candle, the stick of sealing wax, the box of matches and finally, the book Annuaire de la santé about good nutrition and hygiene. 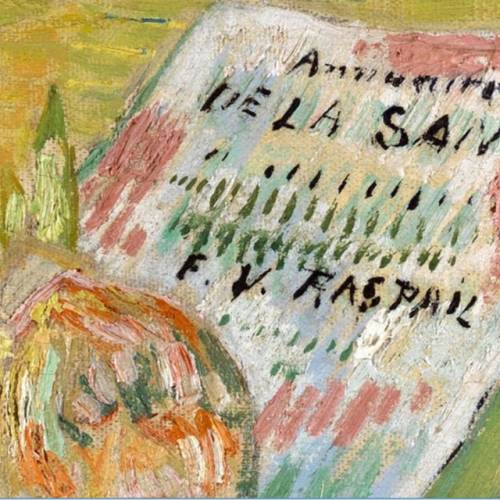