The garden of the asylum at Saint-Rémy

On 8 May 1889, Van Gogh reports for treatment at the asylum Saint-Paul-de-Mausole in Saint-Rémy, not far from Arles. For the first month he is not allowed to leave the grounds, but within the walls is an overgrown garden with pine trees, which proves to be a great source of inspiration for new studies and motifs.

For The garden of the asylum at Saint-Rémy, Van Gogh chooses an unusual viewpoint, next to the wall of the hospital. Due to the diagonal path with a stone bench, the painting acquires a particularly spatial effect. The exuberantly flowering bushes and trees are depicted in a tangle of thickly painted brushstrokes. Despite the huge variety of shapes and colours, the composition has both depth and structure.

The meaning of colours

In September of the previous year, Van Gogh writes from Arles to his sister Wil about what the colours mean to him: ‘We need good cheer and happiness, hope and love. The uglier, older, meaner, iller, poorer I get, the more I wish to take my revenge by doing brilliant colour, well arranged, resplendent’. 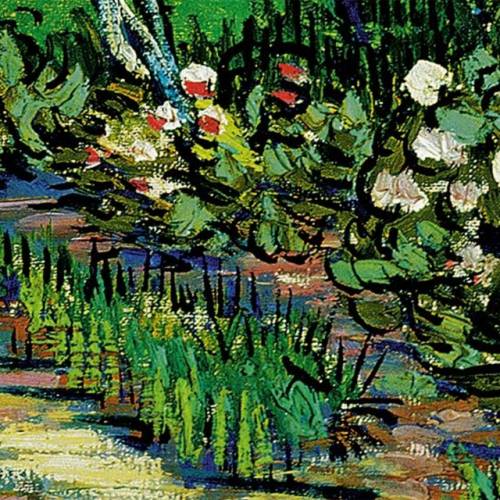