Van Gogh’s example for this painting is The sower from 1850 by French painter Jean-François Millet, whom he admires greatly. He makes dozens of drawings after his great example, but in Arles he wants to paint a new, ‘modern’ version. Not dark, grey and without much colour, like Millet, but with radiant colours and sharp contrasts.

All the attention is drawn to the field with clods of earth, painted in thickly applied, blue-violet and orange paint, almost like a relief. The sower does his work and the sun dominates the scene as an eternal source of light and energy.

The striking aspect of this painting is that behind the sower, who sows the ploughed land with a broad arm gesture, the ripe corn can still be seen. With this, Van Gogh refers to the cycle of nature and of life. The theme of the sower also has a religious aspect for him: the sower on the land represents the sower of God’s word. 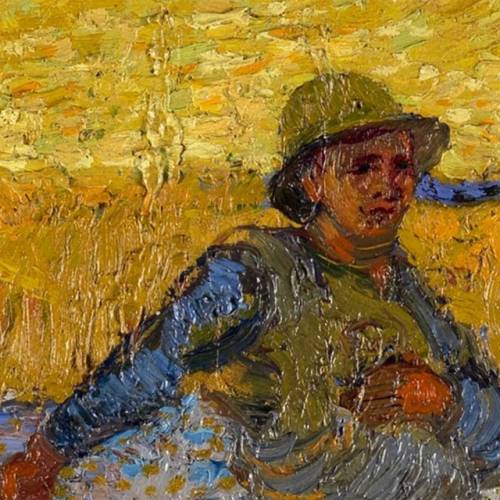