After his classical training in Dusseldorf, Wilhelm Lehmbruck travels to Paris, where he develops his work further under the influence of Rodin, Meunier and particularly Maillol. At the start of his career, he makes mostly marble sculptures, but soon discovers the possibilities of other materials. He has many sculptures cast in cement in order to better preserve the structure and surface of the clay original.

He made this large Standing female figure several times: the first time in plaster, then another six times in cement, as in this version. The woman exudes calm, not only due to her relaxed pose, but also through the slightly tilted head and closed eyes.

In 1914 Lehmbruck is called up to serve in the German army. He works as a nurse in a military hospital. He incorporates his traumatic experiences in tending the wounded and dying soldiers and his own vulnerability into a number of poignant sculptures. In despair over his persistent and severe depression, in 1919 he took his own life in his studio in Berlin. 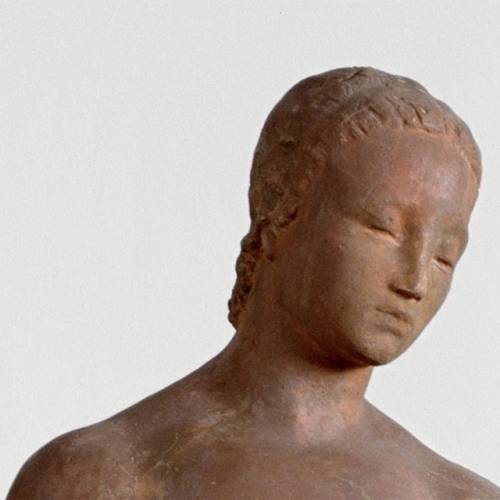