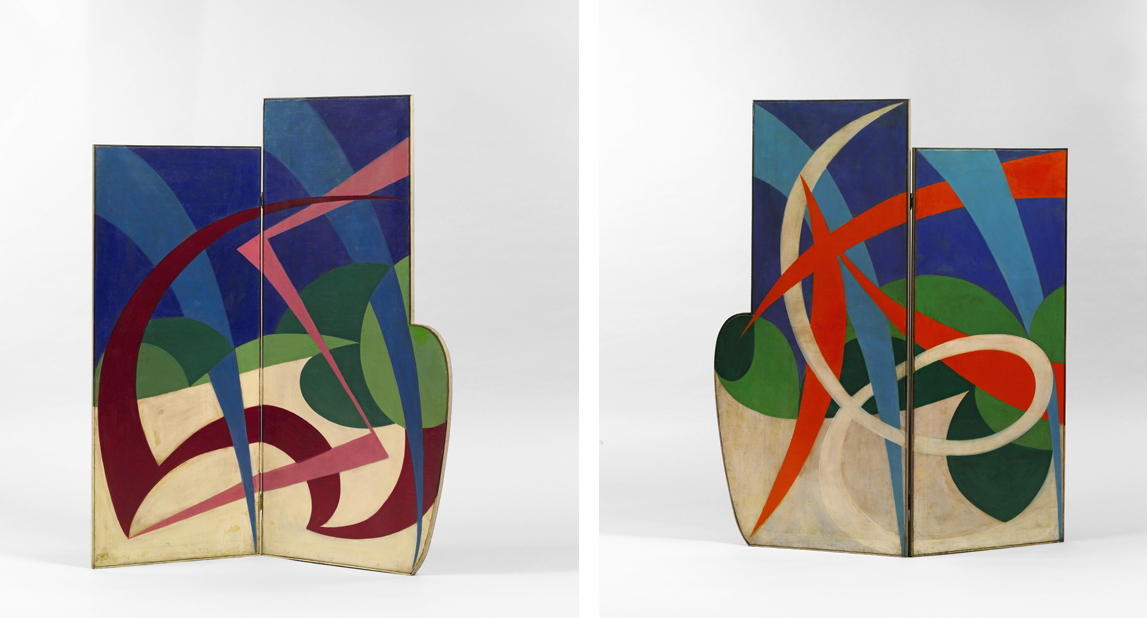 The Kröller-Müller Museum was recently able to acquire Paravento con linea di velocità (Screen with speedline), (1916-1917), oil on four canvases in frames painted by the artist (151 x 126 cm) by Giacomo Balla (1871-1957), with support from the BankGiro Lottery and the Rembrandt Association, thanks in part to its Maljers-de Jongh Fund. Paravento con linea di velocità was purchased at Sotheby’s New York for the sum of € 971,000.

Giacomo Balla was one of the leading lights of futurism, a predominantly Italian movement that embraced the dynamism of modern society, which was best expressed in the speed and technology of the machine. In the application of his futurist principles, Balla did not limit himself to painting. He indulged in countless designs for objects and interior decorations, from components such as futurist flower motifs, covers, lamps, tableware and collapsible furniture to complete interiors.

His Paravento con linea di velocità is a very attractive example of the application of his futurist idiom for the redesign of everyday life. Through the medium of the folding screen, painted on both sides, Balla literally occupies the space and stretches the limits of the two-dimensional canvas. The distinct fresh and contrasting colours also make Paravento con linea di velocità a remarkably modern-looking ‘shaped canvas’, in which light, speed and dynamism are reduced to a synthesis of line and colour.

Futurism as an integral part in permanent display

Paravento con linea di velocità is a fine addition to the futurist works in the museum’s collection, such as Volo di rondini (1913) and Forme rumore di motocicletta (1913-1914) by Balla and the sculpture Forme uniche della continuità nello spazio (1913) by Umberto Boccioni. With these works and others, recently complemented with four drawings from 1914-1915 by Ukrainian painter Oleksandr Bohomazov, the Kröller-Müller is the only museum in the Netherlands able to show futurism as an integral part of art history in its permanent display.