1 Jul 2014
-BLOG- Many visitors have already had the opportunity to see for themselves that the monumental painting Le Cirque from Musée d’Orsay is one of the highlights of the Georges Seurat exhibition. For their part, Musée d’Orsay are equally delighted with the painting that went to Paris in exchange for Le Cirque: Le clown musical from 1868 by Auguste Renoir. 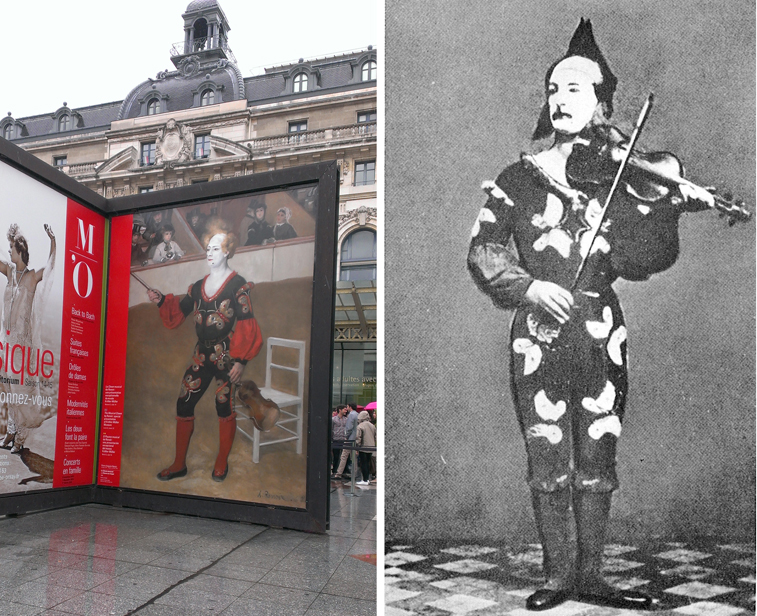 The painting dates from Renoir’s novice years, when he made several large portraits of almost canvas-filling, individual figures. All the attention in Le clown musical is focused on the clown, who is depicted life-sized and fairly detailed and precisely, while the spectators in the background remain rather sketchy. The bright red and the black of the clown’s costume stand out sharply against the ochre sand of the circus ring. The painting was commissioned by the owner of the café of Cirque d’Hiver in Paris. He probably wanted to hang it in his café as an advertisement for the circus. But he went bankrupt and was ultimately unable to pay the honorarium, so the painting remained in Renoir’s possession.

The clown is John Price. In photographs from the eighteen sixties, he can be seen wearing the costume that Renoir must have painted, with the same number of butterflies in the exact same places. The other details of the costume are also entirely consistent, as is the ‘tâche de beauté’ on the left side of his chin. John formed a duo with his brother William. Around 1858, the pair introduced the new genre of the ‘clowns-musiciens’. They entertained the public with music, which they recited, often while balancing on shaky ladders or performing some other daredevil feat. William played flute and John violin and, according to contemporaries, in musical terms too, they were virtuosos in the genre.

The circus in Paris

The fact that both Renoir and Seurat depicted a scene from the circus is not particularly surprising. For many artists, the free, nomadic life of circus artistes represented a fascinating world, separate from bourgeois society. Moreover, popular entertainment – variety shows, circus, singing and dancing – were themes with which innovative painters distanced themselves from the longstanding classical, historical or literary subjects of their academic colleagues. The numerous places of entertainment that set up shop in the then outskirts of the city, such as Montmartre and Montparnasse, became the new meeting places for artists, for enjoyment, but above all for inspiration and to exchange ideas; breeding-grounds for young talent.