A tribute to two generous collectors

1 May 2013
-BLOG- Piet Sanders died on 27 September, just a few days after his 100th birthday. He and his wife Ida were passionate collectors and generous donors. They donated a considerable part of their art collection to Dutch museums and thus ensured that the artworks remained in the public domain in the Netherlands. 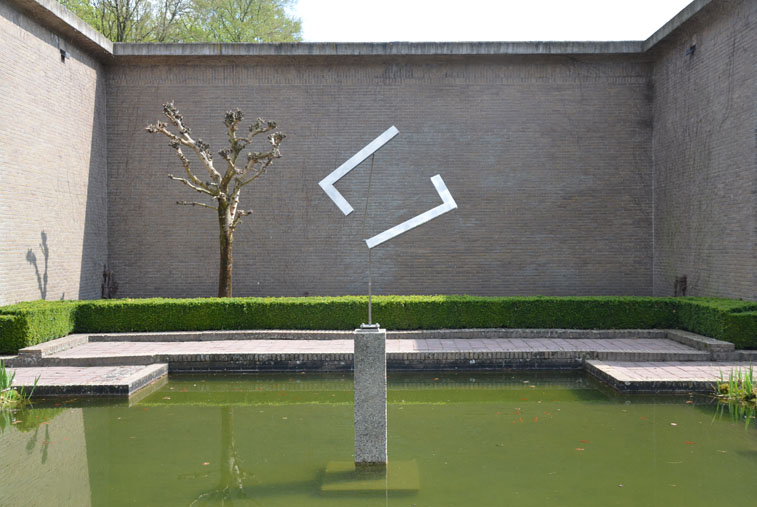 They were especially involved with the Kröller-Müller Museum. From the mid-1960s to the beginning of the 21st century Piet and Ida Sanders donated around 150 works to the museum, including the work of artists such as Jacques Lipchitz, Ryokichi Mukai, Eugène Dodeigne, Hubert Dalwood and Sol LeWitt. I was lucky enough to be able to visit Piet Sanders at the beginning of September at his home in Schiedam. Preparations were then in full swing for his birthday, but we talked about his close relationship during many decades with the museum.

When I was leaving we had a quick look at a beautiful, fragile sculpture by George Rickey in the front garden. Rickey, an American by birth but raised in Great Britain, belonged together with Alexander Calder to the founding fathers of kinetic art (derived from the Greek kinein = move). He made sculptures of geometric forms of polished steel, which unaided by any motor could move and turn at the slightest breeze. The sensation of movement is further highlighted by the light which is reflected by the gleaming surface of the sculpture. From 1966 his Two Vertical and Three Horizontal Lines stands almost ten metres tall in the sculpture garden of the Kröller-Müller. After Piet Sanders died, his family decided to donate the Rickey from his front garden to the museum. The sculpture, which has with One up one down excentric a clear, descriptive title, as always is the case with Rickey, is much smaller and more fragile than the large Two Vertical and Three Horizontal Lines.

A suitable place had to be found for it, in the wind but still sheltered and intimate. The choice to place it at the heart of the original museum of Helene Kröller-Müller was soon made. Henry Van de Velde designed there a small, cross-shaped inner garden with a small pond, surrounded by the Van Gogh Gallery. There One up one down excentric now stands, in the middle of the pond, moving, light and shining; moving and turning to the delight of the visitors, who constantly take photos of the work, and in thankful memory of Piet and Ida Sanders.