In the open air

In 1841, zinc paint tubes appeared for the first time, making painting in the open air a lot simpler. The paint no longer dried out so quickly and was easier to carry. The impressionists took full advantage of this. They left their studios and went painting outdoors, ‘en plein air’.

From on the water

From 1871 to 1878, Claude Monet lived in Argenteuil, a village on the Seine just outside Paris. Following the example of the painter Charles-François Daubigny, he had a boat built in which he could paint the surroundings from on the water. Thus he was able to depict the effects of light on the water and on the landscape from any convenient spot.

In this painting the boat is moored between two poles, motionless on the water. A figure is vaguely distinguishable in the cabin, probably Monet himself. The majority of the canvas is occupied by the calm flowing river, in which the boat studio and the trees, but also the sky are reflected. In this painting, Claude Monet gives an impression of the tranquillity on the water during a summer day. 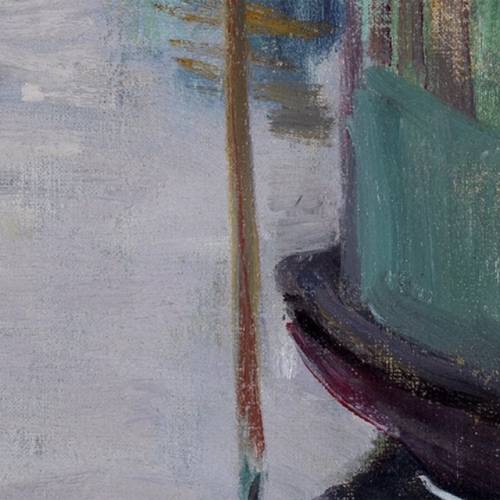