From a grey haze to clarity and contrast

14 Nov 2017
BLOG – The museum recently acquired the painting Les filets, Honfleur, 1912 (73 x 100 cm, oil on canvas) by Félix Vallotton. The work required conservation treatment before it could be presented. Conservator Madeleine Bisschoff discusses that in this blog. 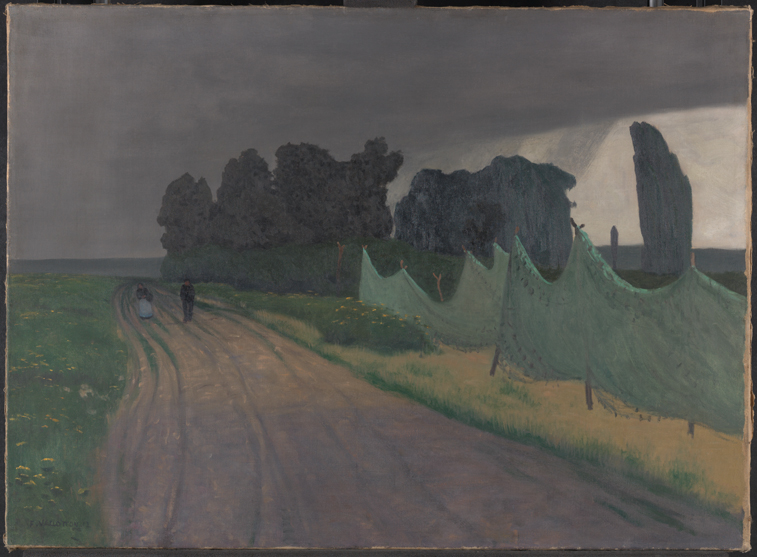 ‘What a strange grey haze hanging over the sky’, was my first reaction when I saw the painting. And how extraordinary that the original frame was preserved. Particularly given that the painting has previously undergone conservation treatment. I could see that from the way the canvas is stretched, a little crooked. There is a piece of unpainted canvas in the bottom right corner, which is strange because everywhere else the paint layer extends to the edge of the image surface. 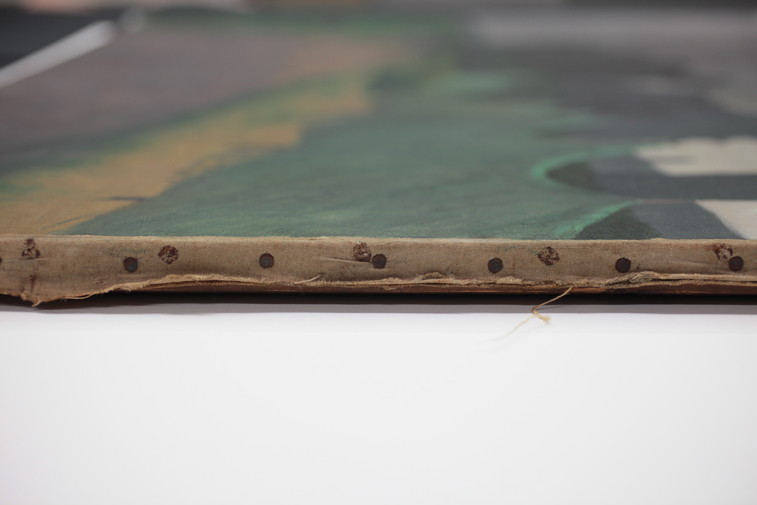 The fact that the painting had once been re-stretched was also apparent from the series of old holes – and the rust spots- between the nails with which the canvas is attached. It turned out that the canvas had also been reinforced with a second canvas, a process known as lining. This second canvas is attached to the back of the original, painted canvas with a thin layer of adhesive.

The fibres of the canvas had been damaged by the rusting nails, which caused the holes around the nails to tear. For this reason, the nails were replaced and the tacking margins reinforced with a thin non-woven polyester fabric. 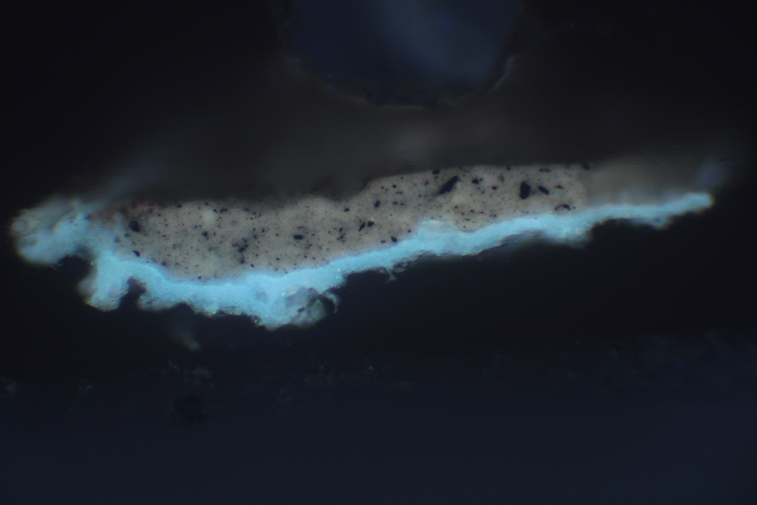 The paint layer of the work is very thin and has virtually no gloss. To achieve this matte appearance, Vallotton took the unusual step of not preparing the canvas with a ground layer. This UV fluorescence image of a cross-section of the paint layer shows that there is, however, a layer of animal glue directly under the paint layer (light blue layer in the picture). Vallotton did this presumably to make the canvas less absorbent and easier to paint on. The glue fixes the threads of the canvas, so that they move less during the painting process. The presizing of the canvas prevents the paint from being absorbed immediately into the fibres of the canvas and makes it easier to apply the paint.

This paint structure – without an intermediate ground layer – makes the painting very fragile. Both the canvas and the glue layer react strongly to changes in humidity by shrinking and expanding. 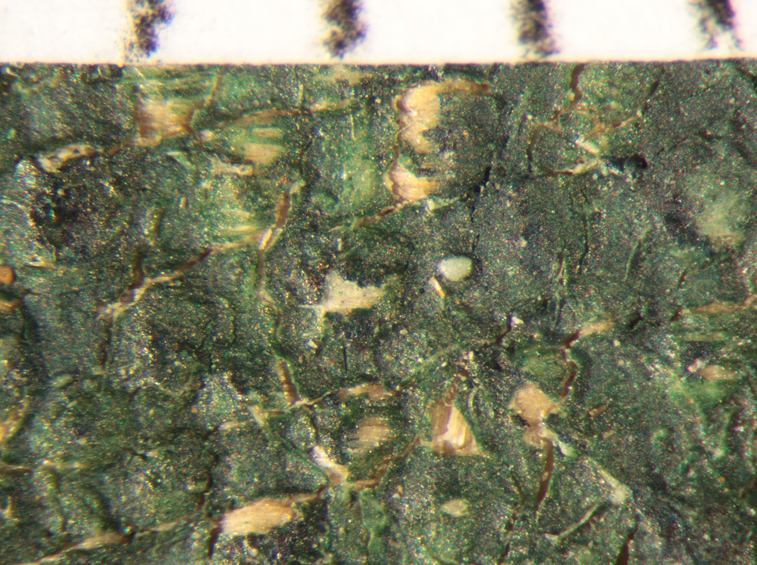 This is a microscope image of the grass in the bottom left corner. You can see that the paint layer is very thin. Fine cracks in the paint are visible. These develop when the cured paint layer can no longer follow the movements in the canvas. The adhesion of the paint to the canvas deteriorates and eventually small pieces of paint flake off. The white strip of paper on the top of the photo indicates that the space between two black stripes is 1 mm. The tiny holes in the paint layer are visible as small light-coloured dots. This causes the coloured areas in the painting to appear less intense. 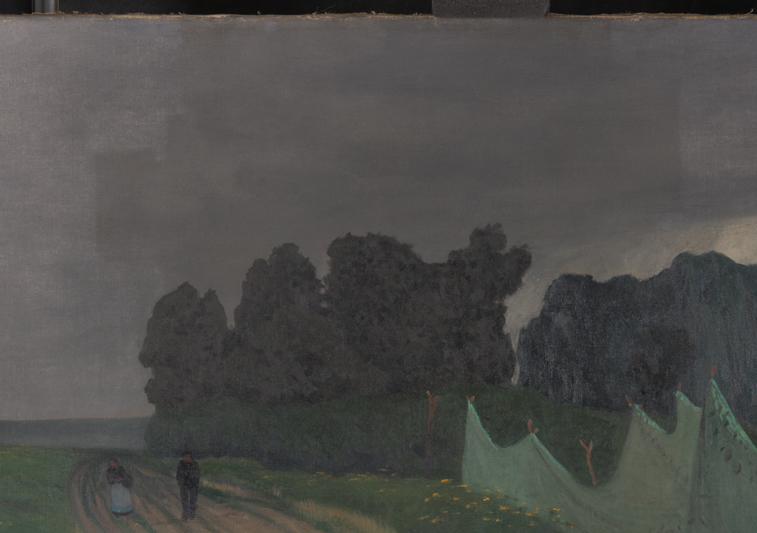 The removal of the grey haze in the sky proved to be a difficult task. The paint layer is not only extremely thin, but also sensitive to moisture. Thus it was necessary to work very carefully with fine brushes and as little moisture as possible to prevent damage to the paint layer. The removal of the dirt layer did, however, result in a marked improvement: the sky has become more vibrant and lighter in colour. The many microscopic holes in the paint layer were too small and too shallow to fill. However, with retouches they have become far less noticeable, so that the eye can focus on the image again. 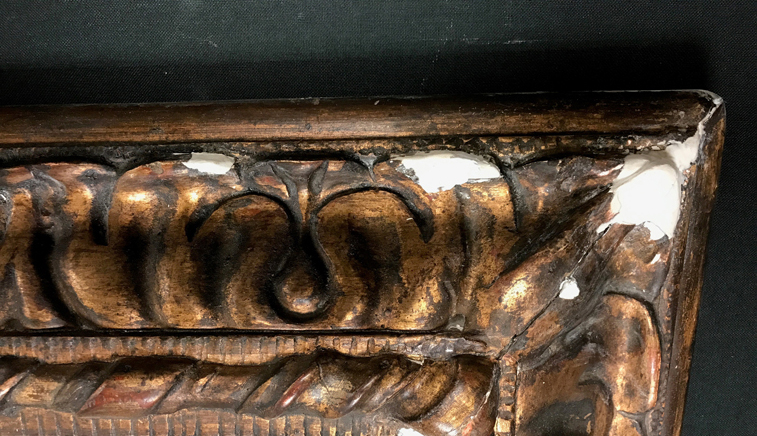 The original frame was also treated. The missing pieces of ornamentation have been replaced and the colour and gloss corrected. Glass was inserted in the frame to give the fragile painting the maximum possible protection, not only from dust but also from changes in relative humidity. This is particularly important because the canvas, the adhesive layer between the two canvases and the preparatory glue layer underneath the paint layer all react strongly to moisture. 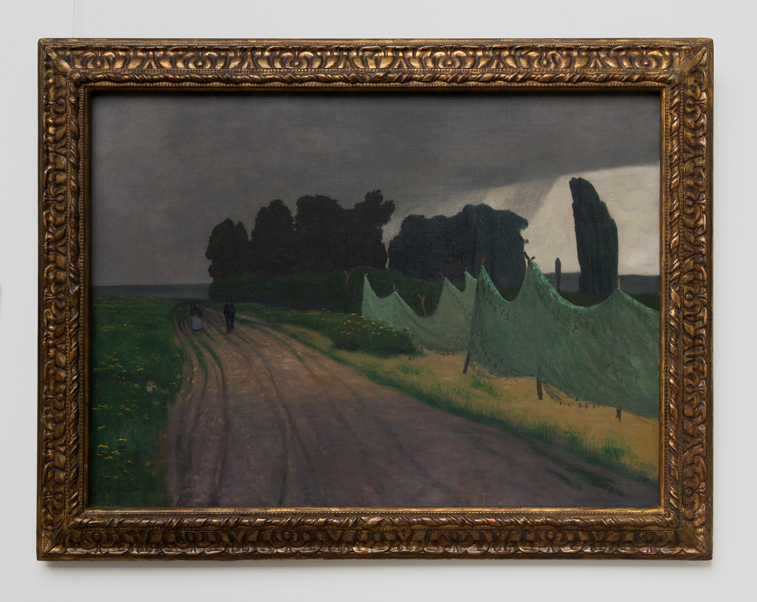 What I initially interpreted as a very meagrely applied paint layer proved in reality to be a paint layer with microscopic damages. These tiny holes in the paint made the coloured areas duller than they were originally. Now, after the conservation treatment which included retouching the small damages in the paint layer, the colours are wonderfully bright again. This creates sharper contrasts between light and dark on the path, and fresh green verges with more volume than before. It is wonderful to see that the picture has gained more depth and has become more powerful, while the conservation treatment was actually very restrained.

Félix Vallotton's Les filets, Honfleur is now on display in the collection presentation. 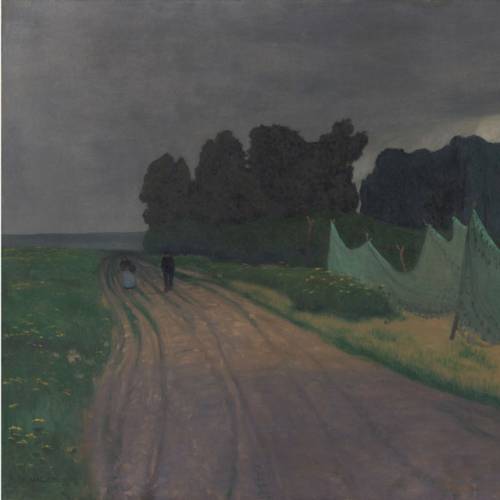