George Hendrik Breitner is renowned as a painter of ‘life in the streets’, particularly the street life in Amsterdam. In his younger years he spent some time with Vincent van Gogh in The Hague and would later remark that Van Gogh made ‘art for Eskimos’, as he was primarily concerned with his own experience of reality. He himself opted for pure, bare reality.

He takes his sketchbook and camera outside to capture cityscapes and scenes of city life both quickly and effectively. The Dam Square, the Damrak and the Rokin, but also the poorer districts such as the Jordaan; elegant ladies and housewives, but also dock workers or girls with flapping aprons. The sketches and photographs he makes in the streets are developed in his studio. With his fluent, impressionist style, he succeeds in rendering to canvas the fleetingness of the moment and the atmosphere of the bustling city life.

Breitner’s work is not as sunny and colourful as that of the French impressionists. He actually prefers the grey, rainy weather, the snow, the wind and the dark days of autumn and winter, with people walking hastily in the street. As in this painting. 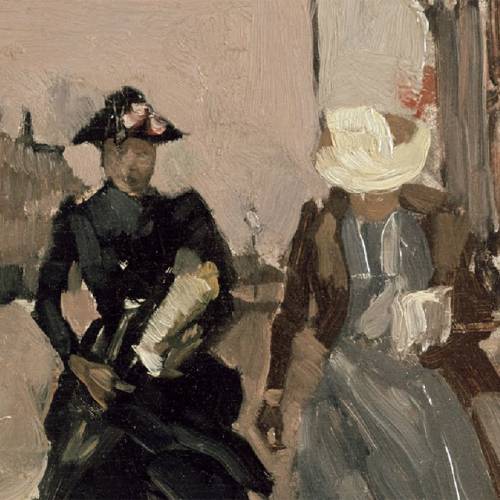