Ger van Elk (1941–2014) is regarded as one of the pioneers of conceptual art in the Netherlands, together with his contemporaries Jan Dibbets, Marinus Boezem and Stanley Brouwn. A highlight of his oeuvre is La Pièce, a small, white wooden block on a red velvet cushion. 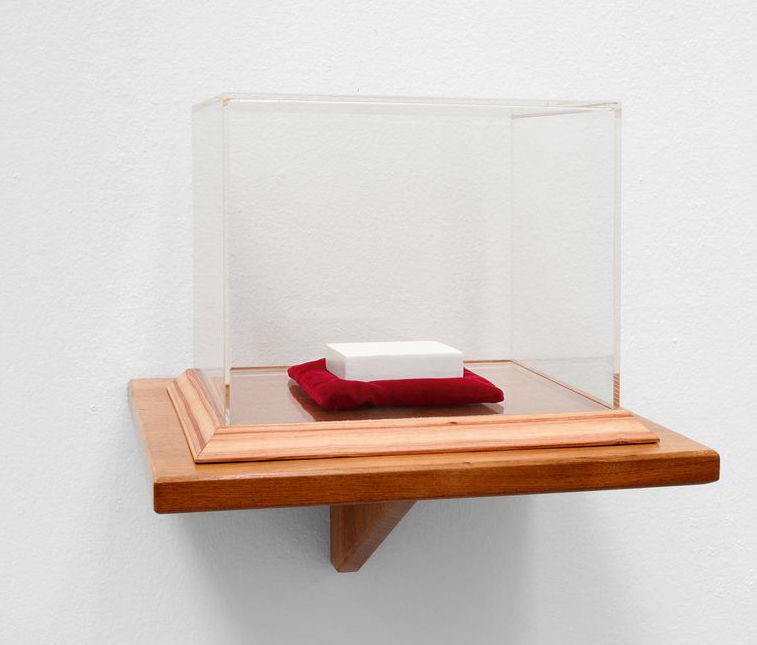 Unlike in ‘strict’ conceptual art, the execution of a work of art – and not just the idea – also plays an important role for Van Elk. With much humour and the ability to put things into perspective, he undermines the traditional dividing lines between painting, sculpture and photography and between two- and three-dimensional.

La Pièce consists of a film and a small, white wooden block that lies on a red velvet cushion like an expensive jewel. Van Elk made this work in 1971 for the ground-breaking exhibition Sonsbeek buiten de perken. La Pièce is a response to the huge dimensions of the sculptures created by a number of American minimal and land art artists at that time, who were also invited by the organizers of Sonsbeek. These included Claes Oldenburg, Walter de Maria and Richard Serra.

Painted in the middle of the ocean

Van Elk paints the tiny wooden block white in the middle of the Atlantic Ocean, somewhere between Ireland and Newfoundland, where the air is so pure that no dust can settle on the wet paint. He copied this method from the creators of Chinese imperial lacquerware paintings, which were also often produced at sea for the same reason.

Crossing the ocean on an icebreaker and passenger ship

Van Elk records his journey on film. The first part ‘Westbound – ws Transontario’ shows his crossing of the Arctic Ocean on an icebreaker from Northern Germany to Canada. In the second part ‘Eastbound - ss France’ he makes his return journey aboard the SS France, one of the largest passenger ships at that time.
Van Elk describes La Pièce as ‘the maximum effort for a minimal result’. The film that he made of this action is showing together with La Pièce.