How the silver trowel became blue

26 May 2016
-BLOG- Did you know that the blue sculpture in the shape of a trowel, which stands at the T-junction to the museum, originally wasn’t blue at all?

As an apprentice museum conservator, one of my duties is to conduct research into Trowel (1971) by pop artist Claes Oldenburg (1929). This large sculpture in the shape of a trowel will undergo conservation work in the summer of 2016. During the preparatory research by Susanne Kensche (conservator modern art and sculpture), many uncertainties about the work arose. I was asked to write a report based on archive material of the trowel. This blog offers an account thereof. 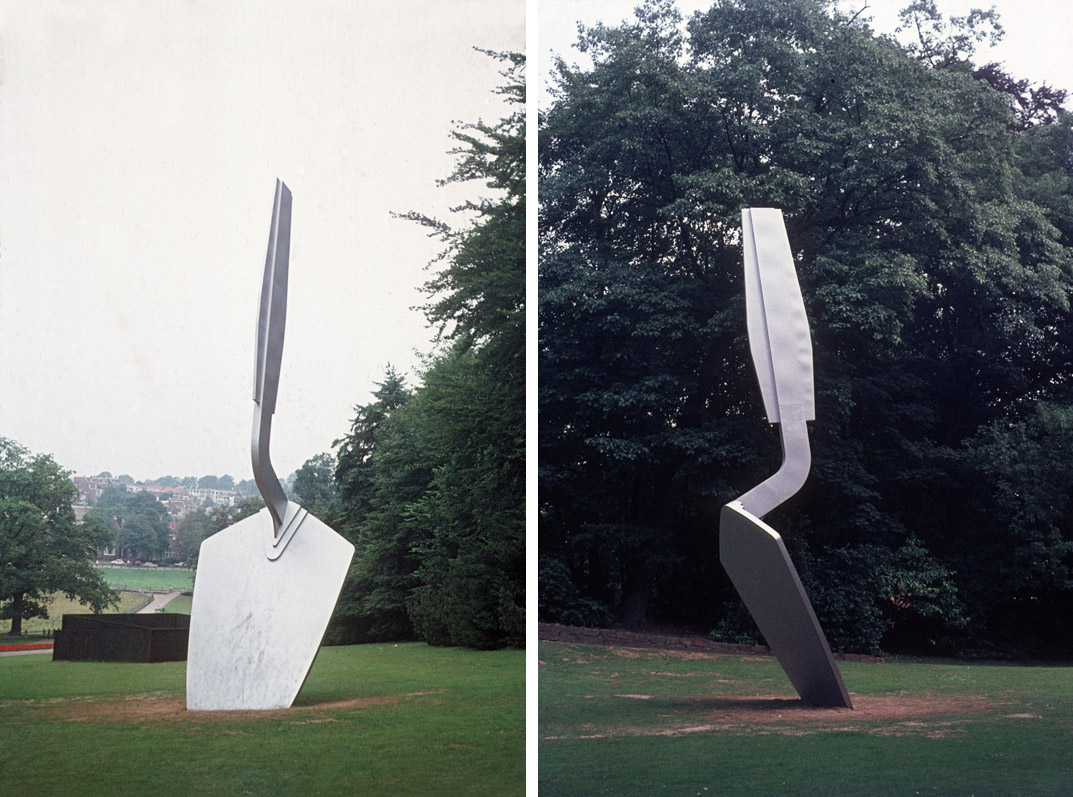 Oldenburg made Trowel in 1971 for the exhibition Sonsbeek ’71. Sonsbeek buiten de perken in Arnhem. At that time, the then still silver sculpture was the most expensive work of the exhibition to produce. To nonetheless be able to afford and display the work, the Sonsbeek Foundation decided to work together with the Kröller-Müller Museum. The director at the time, Rudi Oxenaar (1925-2005), in consultation with Oldenburg, decided to include the work in the collection after the exhibition.

The correspondence between Oldenburg and Oxenaar reveals that together they chose a location near the museum: the T-junction close to the entrance. In this letter, Oldenburg made a sketch for the location of the trowel.

After its arrival, unfortunately, the sculpture soon fell into disrepair. The silver paint layer was damaged and several rust spots had developed on the blade of the trowel. Therefore, in 1972 the decision was taken to preserve the work and paint it silver again.

In 1975, Oxenaar wrote to Oldenburg that, due to its continuing poor condition, the work needed to be painted again. Apparently, Oldenburg wanted to give the work a different colour. From the same letter, it is apparent that they discussed a more noticeable colour: ‘[…] However, the technical problems are such that the piece has to be painted and it would then indeed be more honest to let it look painted. Red could make it look very aggressive; is another colour feasible in your philosophy?’ Eventually, Oldenburg chose a shade of blue. On his website he mentions that one of the reasons for this colour is that it confirms the function of the work: it refers directly to the clothing (the overalls) of the workers who use the trowels. Furthermore, a blue trowel immediately stands out in the landscape. 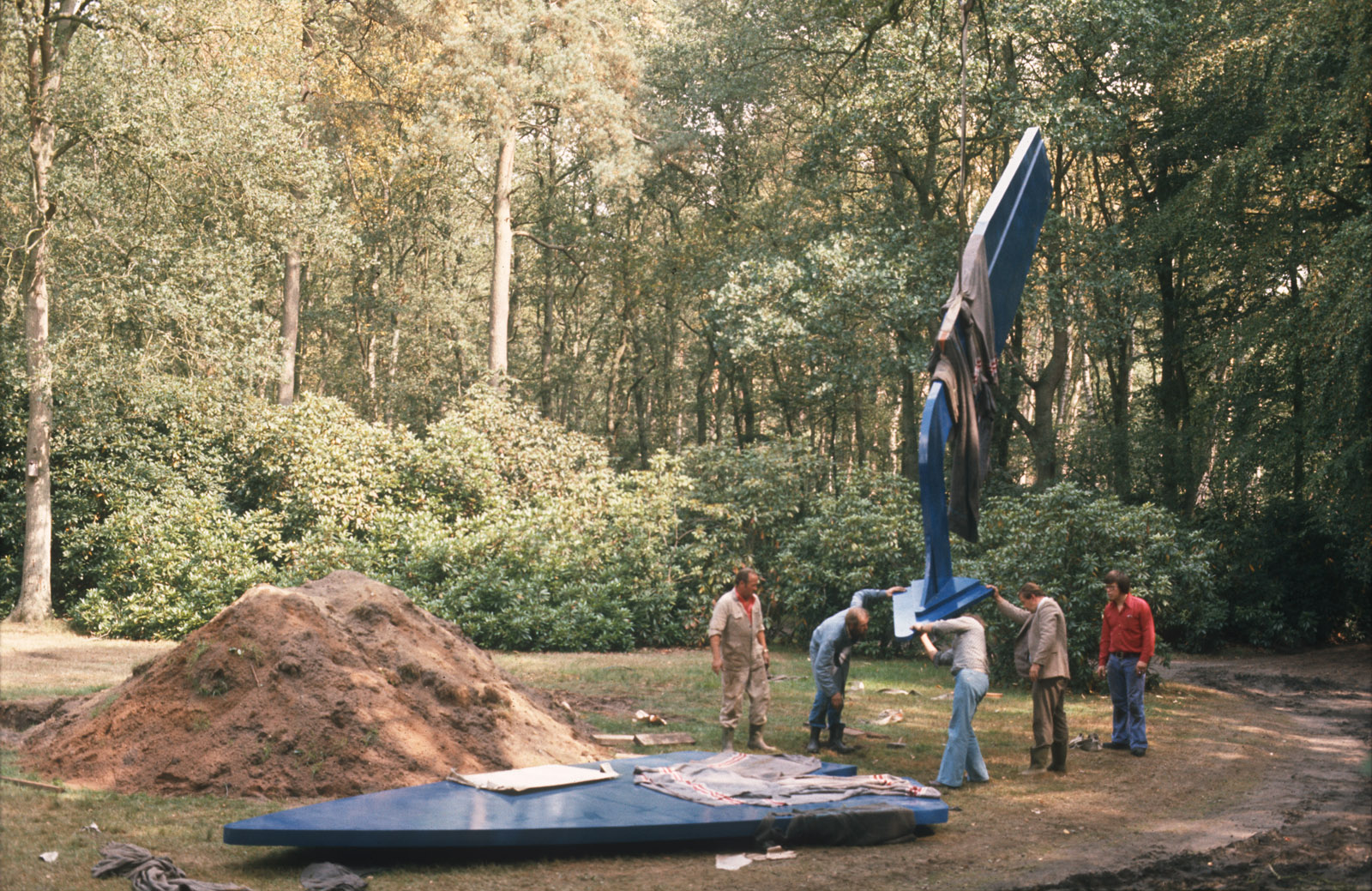 In 1976 the work was treated and painted by the metalwork company Nebato B.V. Bergeijk. After this treatment, the trowel was transported to the sculpture garden of the museum, where it stood until 2002. Then, the work was returned to the T-junction near the entrance of the museum, the spot that Oldenburg and Oxenaar previously chose due to the spacious surroundings. It’s a real eye catcher or landmark that announces the museum, as it were, like Henry Moore’s Three upright motives on the other side of the park. During this period, the work was again repainted at least twice in a shade of blue. 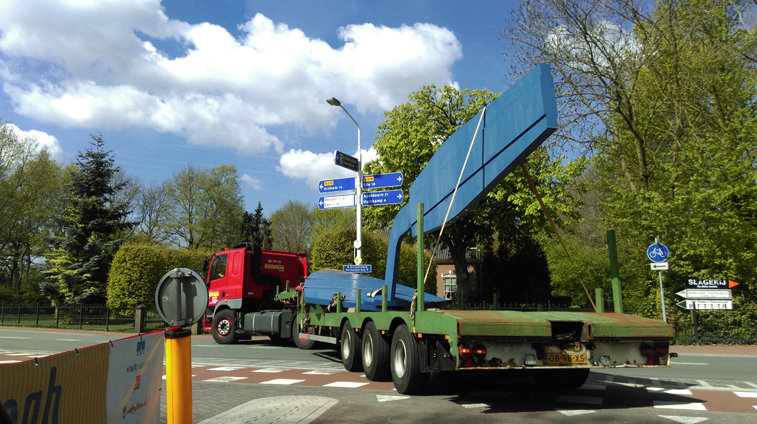 Where is the trowel now?

During the research, it became clear that tracing the correct, original shade of blue would be quite a challenge. Due to its current condition, a new conservation of the work is required. The paint layer is again weathered and the metal has started to rust in places due to the rain, sun and the ravages of time. Therefore, on 4 May 2016 the trowel was dismantled on site and transported on a large low loader to a metalwork company to investigate any further problems. The handle was also removed from the blade. Quite a job, but well worth all the trouble, because under the handle, a large undamaged section of the original blue paint was preserved, as the work had always been repainted on location.

The museum is conducting further research into the problems and solutions concerning the condition. For example, the rust needs to be addressed and the trowel will be provided with a new paint system in the original shade of blue. This will ensure that the work looks beautifully painted again in the coming years.

Trowel will be back on display this autumn. Then, you can also view the history of the trowel in detail during a small presentation that will take place in the museum.

Eline de Graaf (1990) has been at the Kröller-Müller Museum since February 2016 as apprentice museum conservator. She is following her study (MA Heritage Studies Museum Conservator) at the VU Amsterdam. In addition to this research, Eline is also working on the upcoming exhibitions, and she helps with the everyday activities of the museum four days a week.

Thanks to further research, we now know that Trowel was completely remade in 1976. We found indications of this in construction drawings from Oldenburg’s studio that were sent to the museum in that year. And while we were inspecting the work itself and saw that the interior of the trowel was still in very good condition in 2016, we knew for sure. This trowel is a remake of the trowel from 1971. Since January 2017, the blue trowel – now fully restored – has returned the T-junction of the road to the museum. (Eline de Graaf, January 2017)

Images: Claes Oldenburg, Trowel, 1971 (location: Park Sonsbeek, Arnhem), sketch by Claes Oldenburg in a letter to Rudi Oxenaar, 1971, date unknown, silver Trowel at the T-junction, Trowel, location after 1976, transport of Trowel to the sculpture garden in 1976, the trowel on its way to the metalwork company, 4 May 2016.