3 May 2016
From 14 May until 28 August, the Kröller-Müller presents sculptures and works on paper by Leo Vroegindeweij (Dirksland, 1955). On show is work from the period 1976-2000, from the former Art & Project collection and the collection of the museum.

Vroegindeweij rose to prominence in the nineteen eighties with a series of sculptures made of folded sheets of lead or copper. The sheets are cut from a single floor piece and are mutually complementary, like a yin and yang symbol. By sculpting and deforming the sheets, Leo Vroegindeweij makes sculptures with flowing, sensual surfaces and with sharp, jagged cut edges that gently absorb or reflect the light. 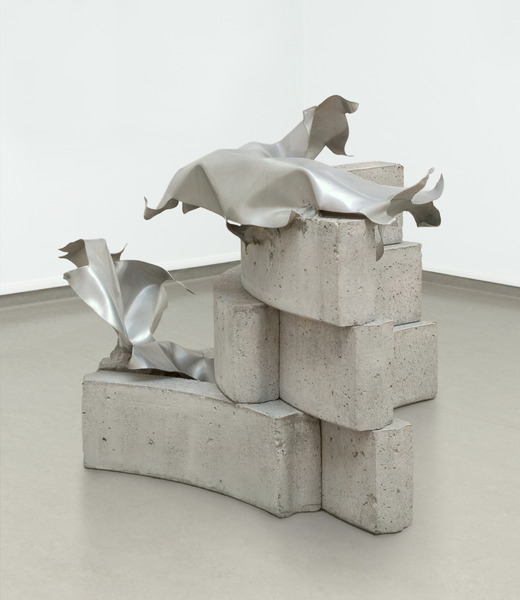 Besides these literally hand-moulded sculptures, Vroegindeweij also began casting forms in concrete. These are again combined with soft materials, such as lead, copper and aluminium, or with the solidified surfaces of tin or beeswax, whereby the sculpture acquires an element of vulnerability in addition to a certain ruggedness.

Prefabricated elements are also used, for instance in a rhythmic stack of curved curb stones, crowned with capriciously crumpled aluminium. Or in the work with fifteen hexagonal concrete tiles, arranged on the floor in a circular pattern, resting on fragile aluminium wedges.

Work in the sculpture gaden

A similar contrast in the appearance and properties of the materials is characteristic of a monumental sculpture from 1992 with three sewage pipes. Inside these, a number of powder-white plaster balls play a game with the circular orbit of the pipes. In 2002, the sculpture was given a ‘home of its own’ in the form of a greenhouse. The work is now on display in the museum’s sculpture garden.

After his postgraduate study at Ateliers ‘63 in Haarlem (1976-1987), Vroegindeweij was attached to the prestigious gallery Art & Project (1968-2001). In 2013, Adriaan van Ravesteijn (1938-2015), former gallerist of Art & Project, donated over two hundred works of art to the Kröller-Müller Museum, including more than twenty by Leo Vroegindeweij.