Van Gogh painted a total of five versions of La Berceuse (portrait of madame Roulin). Augustine, the wife of Joseph Roulin, was the model for the paintings.

Van Gogh was less interested in making a good likeness than he was in making a representation of a ‘cradle rocker’ or a ‘lullaby’ (‘berceuse’), to offer comfort. The cradle is not visible, but Augustine holds the string with which she can rock the cradle. 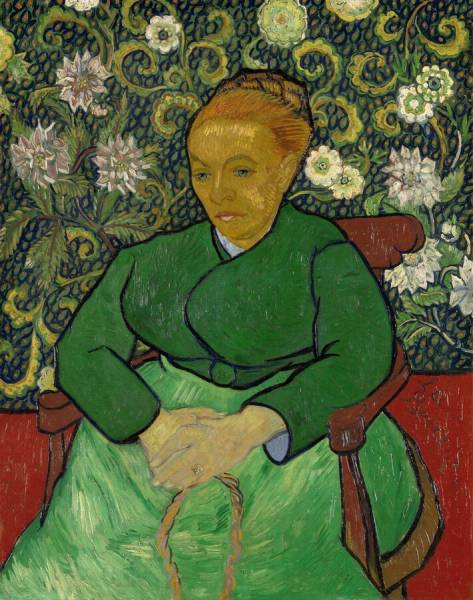 Comfort and warmth
Van Gogh had a special intention with this portrait. He is not so much interested in the likeness of Mrs Roulin, but in the atmosphere of the painting. Augustine symbolizes motherhood. The title and the colours, like the notes of a lullaby, evoke a feeling of comfort and warmth in those who see the painting.

Varnish
Just like the portrait of Joseph Roulin, sections of the painting have become discoloured in the course of time, such as in the now somewhat yellowish face. There is a thick and very yellow layer of varnish and a lot of other dirt on the painting. As a result, the bright colours are covered by a yellow-brown haze.

Fan becomes Backer
A regular visitor and big fan of the Kröller-Müller Museum became a Silver Backer in 2014. She decided to earmark a large part of her contribution for research into the conservation possibilities for La Berceuse.

Research results
The results of the research show that a relatively large part of the painting cannot have conservation work carried out, as the varnish layer cannot be removed. The investment, however, was not for nothing, because thanks to the research a great deal of information was collected about the work and the condition of the paint, which may prove useful for conservation research into other works by Van Gogh and his contemporaries.