From 16 October 2021 to 13 March 2022 inclusive, the Kröller-Müller Museum will host the Panamarenko. Reise in den Sternen (Voyage through the stars) exhibition. Aeroplane Continental stands in the middle of the museum room. This imposing work of art was made in 1974 and boasts a wingspan of 18 metres. Belgian artist Panamarenko (1940-2019) began making flying machines in the 1960s. Aeroplane Continental looks as if it could take off at any moment if a pilot sat in the pilot’s seat and used the pedals to make the propeller and the wheels move. Or is such a thought merely a flight of fancy? 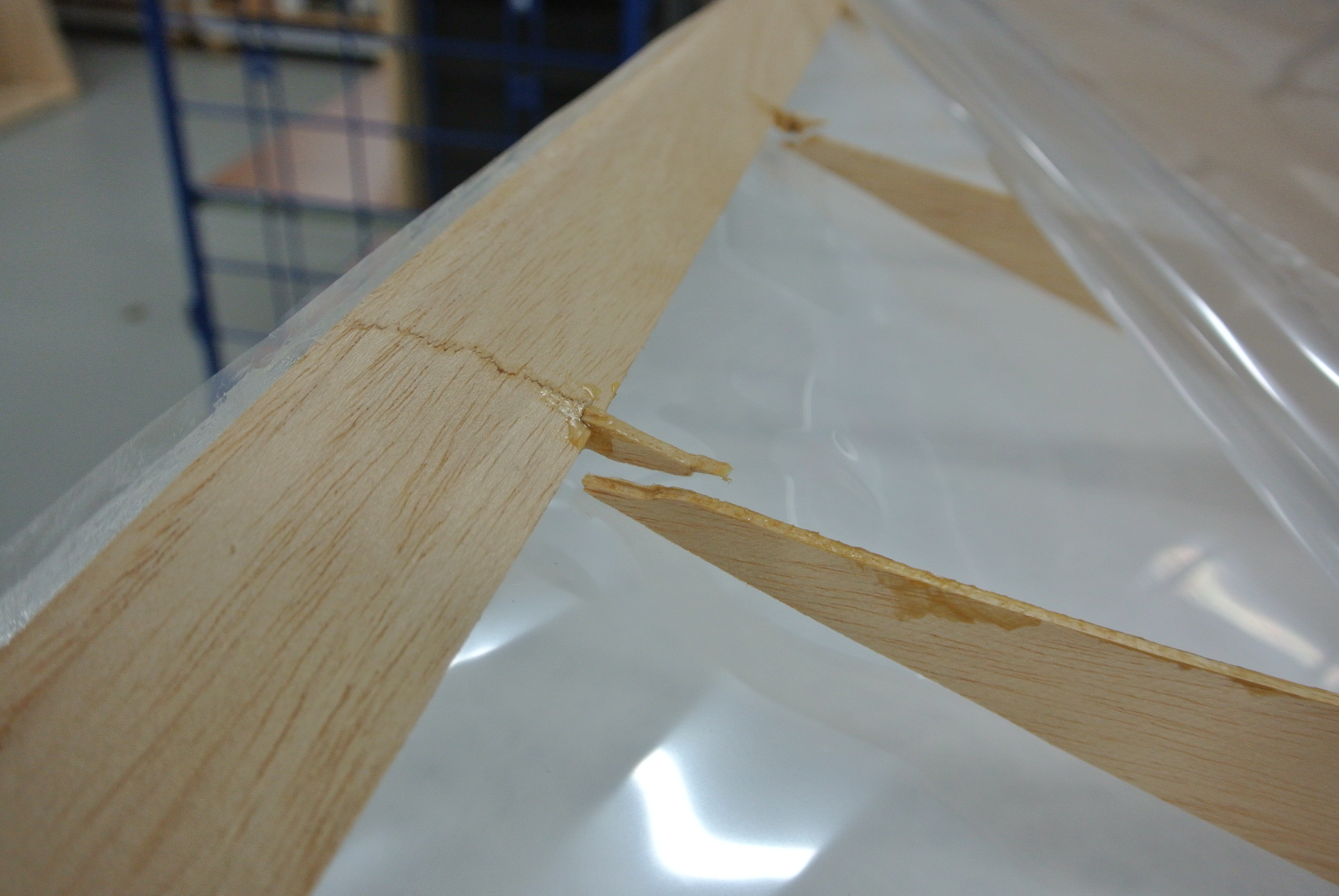 Materials as light as a feather

With his use of materials as light as a feather, Panamarenko creates the impression that the aeroplane could take flight by a person’s physical efforts alone. He constructed the aeroplane from fibreglass tubes, polystyrene foam, balsawood, and cellophane foil. While these materials are light, they are also very fragile.

The aeroplane was last on display in a museum room in 2003. As time went on, different parts of the plane became damaged. For example, trusses of wing components were broken and bended. In a number of locations, the tips of the broken parts of frames were prodding against the foil used to wrap the wing components. This created the significant risk that the pointed tip could perforate the taut foil during transport of the wing components from the depot, or during the installation or positioning of the aeroplane in the museum room. This meant that the aeroplane needed some maintenance before the work of art could be put on display. Only instances of damage that formed a risk of causing further damage were addressed when performing maintenance on the aeroplane. The smaller instances of damage that are still present represent part of the history of the work of art. 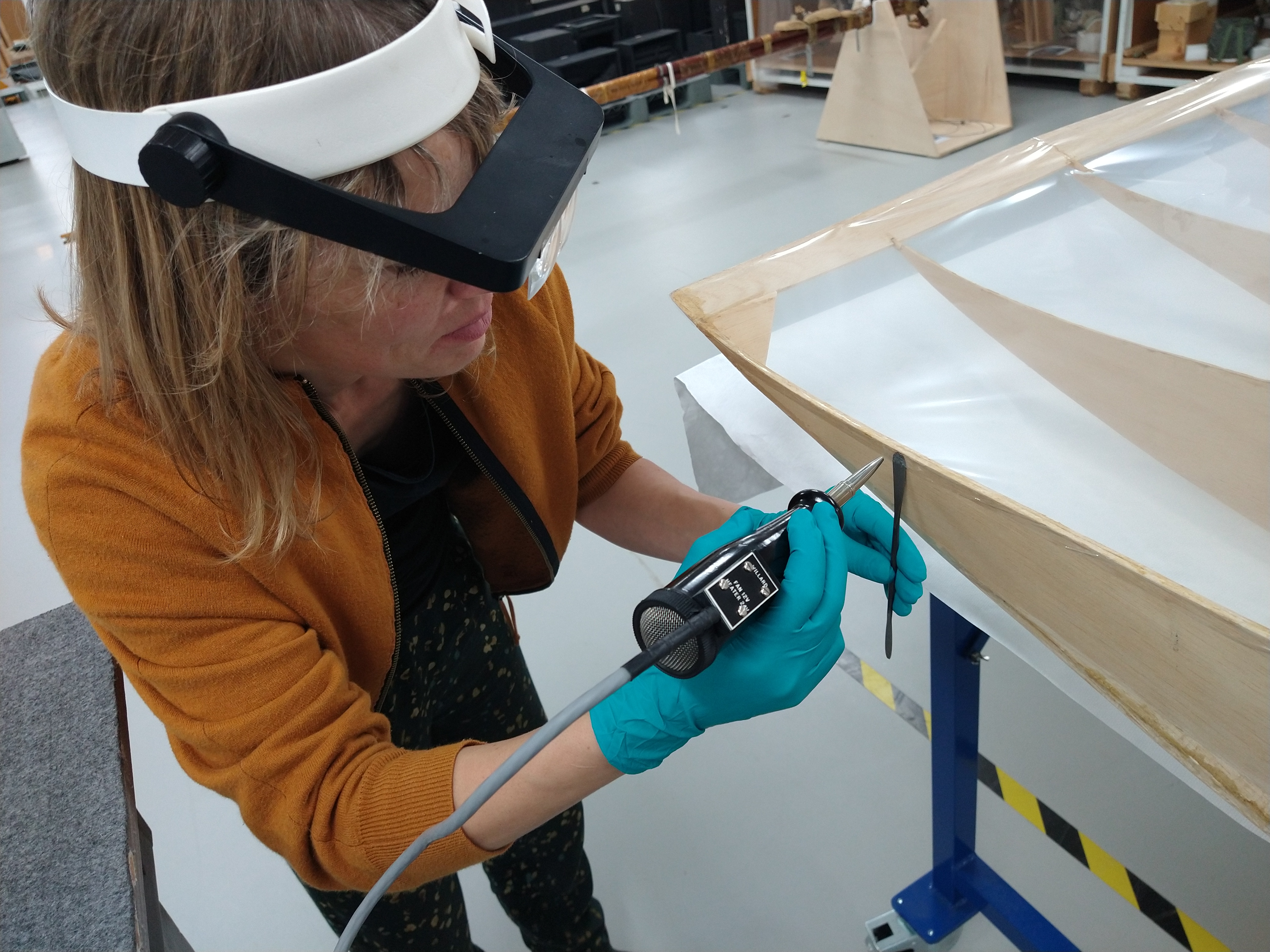 How can you glue a broken truss within a wing component that’s covered in foil? A dummy – a scale model of a wing component made by a museum employee – was used to determine a treatment method. This meant that all steps of the restauration could be investigated. What would be the best way to remove the foil? What will happen to the tension of the foil if it is removed? How much space would be required to leave the glued and clamped components to dry? How can the truss be clamped without the foil being damaged? What would be needed to then reattach the foil? Using a dummy, it is possible to test out methods and become familiar with the materials and construction methods applied by the artist. Pulling slightly harder on the foil or exerting slightly more force on the wood reveals what is and what is not possible with the material. People would never perform such actions on works of art. By first performing the full treatment on the dummy, assessing every step between each step, and sometimes adapting steps, a step-by-step plan was developed for the restoration of the wing components.

The edge of the foil, where it is affixed to the wood, is heated with a miniature hairdryer. This melted the glue and ensured that the foil could be carefully detached. The broken wooden parts were glued with sturgeon glue – a strong, reversible glue. Glued parts of the work of art were left to dry following the application of clamps, such as lightweight plastic socket spanner clamp, balsa wood slats, and both plastic and cardboard plates. The maintenance resulted in the desired outcome. Aeroplane Continental is on display in the museum hall, ready for take-off. Or is such a thought merely a flight of fancy?

The exhibition Panamarenko. Reise in den Sternen is on display until 13 March 2022.

Panamarenko. Voyage through the stars 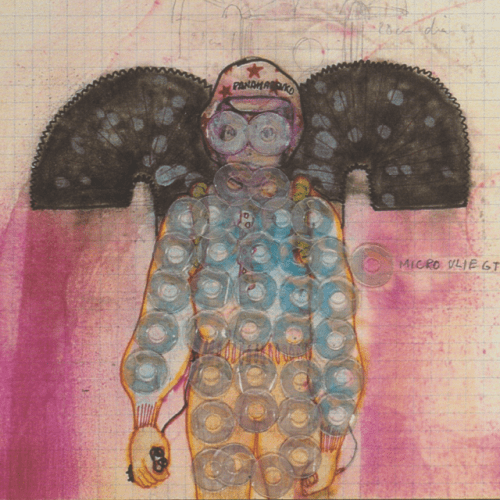 Read more about the exhibition, on display until 13 March