To a new version of Rocky lumps

Rocky Lumps (2005) by Tom Claassen (Heerlen, 1964) was purchased by the Kröller-Müller Museum in 2006. The work will be given a place in the sculpture garden, on a neatly trimmed part of a lawn. When in place, the snow-white ‘boulders’ will look like an abstract rocky landscape shaped by the elements. However, from above, they will form the shape of a person, featuring a head and large feet with parts of a torso, arms and legs in-between. This charming figure appears to have collided with the ground and then partially sunken into it.

Tom Claassen is mainly known for his figures of people and animals, which have been shaped into figures that appear simple but are unmistakably Claassen’s work. The rounded, spherical shapes that typify his work resemble friendly figures that are endearingly clumsy or awkward. They often appear to be too big, as if they were collapsing under their own weight.

Claassen created over thirty sculptures for public spaces, including the well-known Olifanten (Elephants) from 1999-2000, which is next to the A6 / A27 at Almere.

Rocky Lumps, while not made for a specific location, is a defining work in his oeuvre. Located in the Kröller-Müller Museum’s sculpture garden, the work has been given a place in an open space. 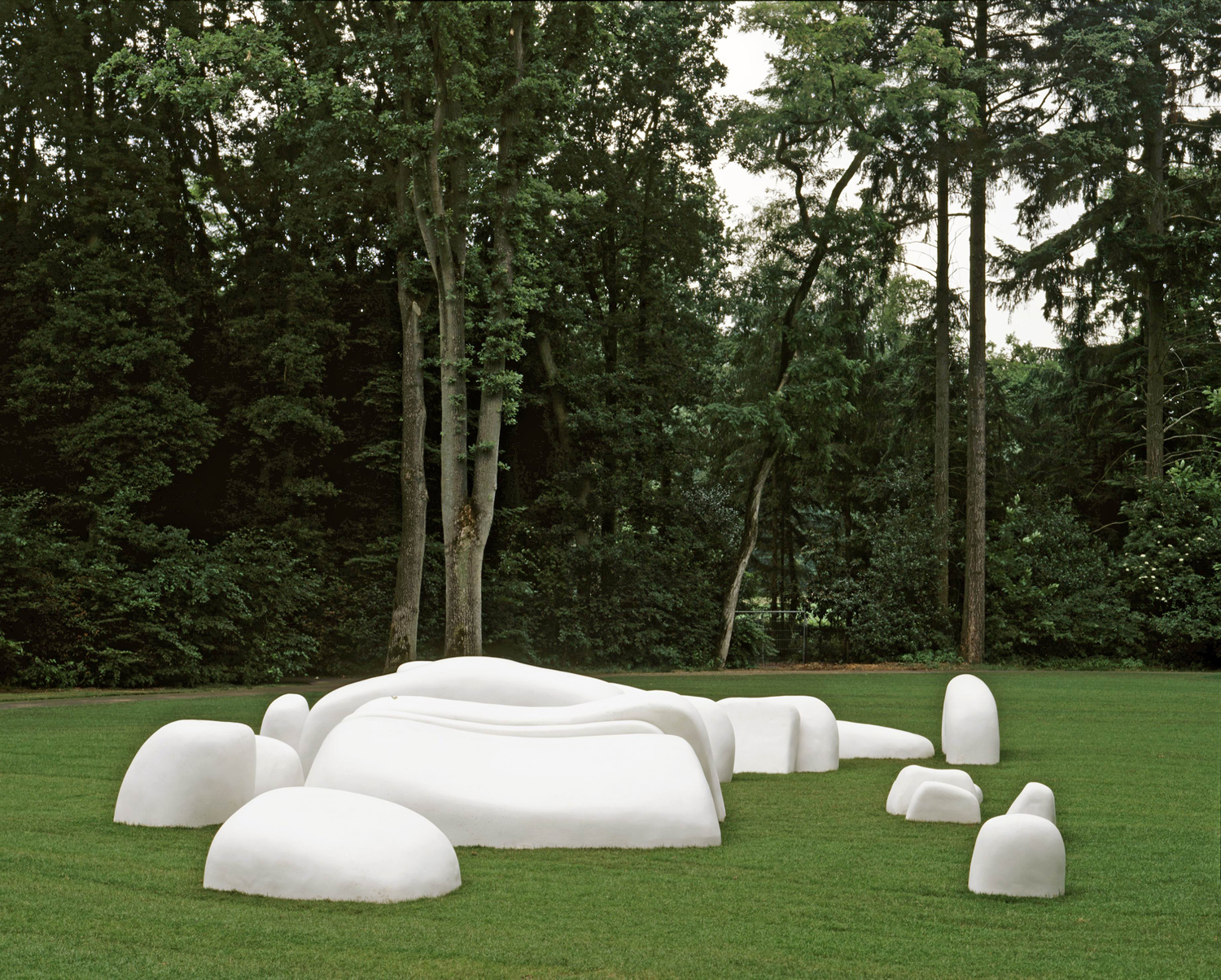 Irreparable damage
Rocky Lumps was made from white pigmented concrete with polystyrene core in 2006. Due to errors in the construction and production of the work, the material was not able to withstand the elements and the many children who enjoyed climbing on it. The drainage was also poor.

The damage which was caused appeared to be irreparable, and in consultation with Tom Claassen, Rocky Lumps was declared ‘beyond repair’ and completely destroyed in 2015. The elements were preserved for documentation.

When the decision was made to destroy the work, both the museum and artist announced their desire that a new version of Rocky Lumps be made. That is why a full 3D record was made before the original work was destroyed.

The new version
From the start of work on the replacement, it was clear that the new version should not be a copy of the original. Only the used number of parts (25) as well as the total surface area (around 10 by 15 metres) would remain the same. The material to be used needed to be sustainable and resistant to the elements. A new location for the work needed to be chosen.

The material chosen for the work was soft pink quartzite, which would be imported from Brazil. Franse Berg hill, in the sculpture garden, was chosen as the new location. On a lower part of the hill, Rocky Lumps ll would be placed over the path so that visitors literally walk through the sculpture. The height differences in the area would also ensure that the work could be viewed from above, meaning that the half-buried figure would be more visible. 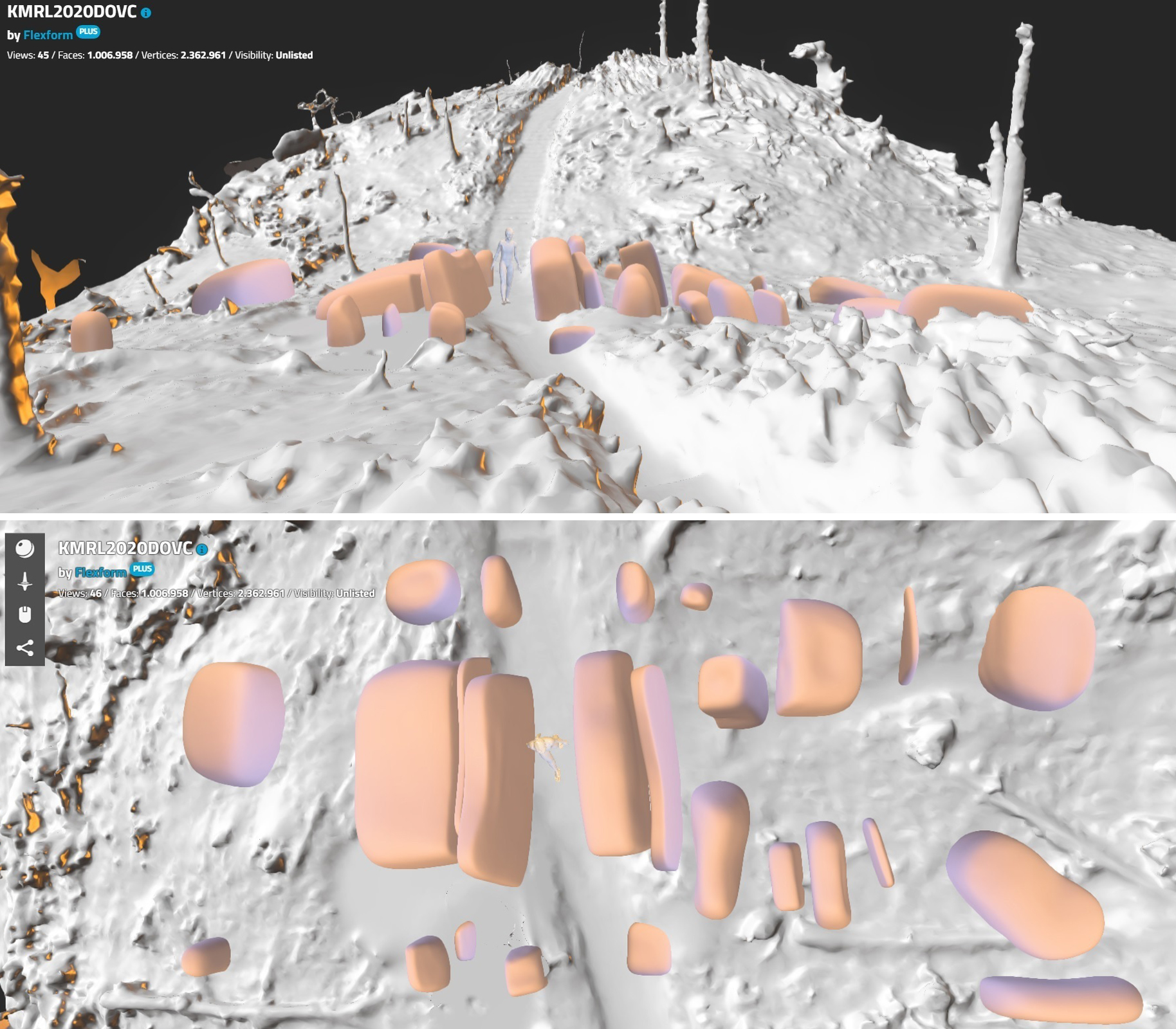 Scheduling
The logistical challenge was both in getting 27.5  m³ of stone to the Netherlands and in placing heavy blocks of stone in an area that is both difficult to access and fragile.
In August and September, we will be working on the placement of Rocky Lumps ll, with respect for the flora and fauna. In connection with the work, parts of the sculpture garden at the Franse berg (French Hill) have been cordoned off and steel plates have been laid for the transport of heavy equipment. These steel plates may be slippery during or shortly after rain. We therefore recommend that you stay on the paths. Work on the new Rocky Lumps II will be completed at the end of September 2021.

The realization of Rocky Lumps II was made possible partly thanks to the participants of the Vriendenloterij and a substantial private contribution.
According to the schedule, the new version of Rocky Lumps will be opened in 2021.