Joseph Roulin worked as the postmaster at the station in Arles. Van Gogh went there frequently to send paintings to his brother Theo in the Netherlands and they became close friends. In a letter to Theo he describes him as ‘a man who is not bitter, not melancholy, not perfect, not happy and also not always perfectly honest. But such a good fellow, so wise, so feeling and so faithful’.

Between August 1888 and April 1889 he painted six consecutive portraits of Joseph, three of which had flowers in the background. In this colourful painting he chose summer flowers. The poppies, cornflowers, daisies and roses are painted fairly precisely, in contrast to Joseph’s face and full beard with the stylized curls. Here, Van Gogh has applied the paint with a quick, fluent brushstroke.

Van Gogh was always looking for models. When the opportunity arose to also paint Joseph’s wife and three children, he grabbed it with both hands. He painted no fewer than twenty portraits of the Roulin family. 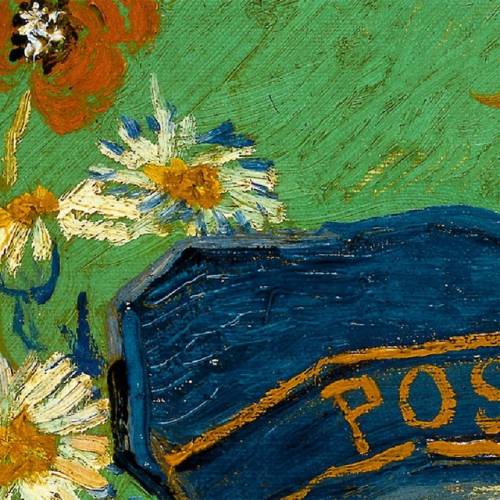