30 Jun 2012
-BLOG- William Degouve de Nunques painted Lake Como at twilight while on his honeymoon, which he could afford to stretch out over several years. But whether that’s apparent by looking at it is questionable. It is certainly the case that the period after his marriage to artist Juliette Massin was highly productive. 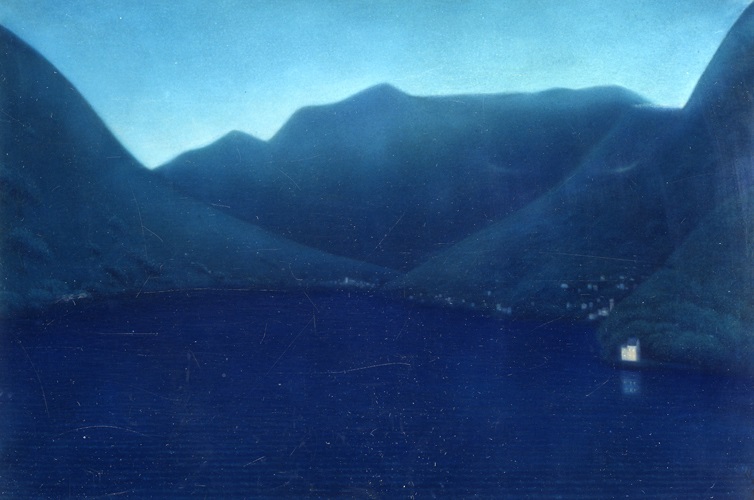 The master of the night piece

In that time he developed into a master of the night piece, a characteristic theme of the Belgian symbolist movement to which Degouve belonged. At the exhibitions in the salons of Brussels, the symbolists were impressed by the ‘nocturnes’ of American-English painter James Abbott McNeill Whistler. And there was a lively interchange with poets and writers such as Verhaeren, Maeterlinck and Rodenbach, whose work evoked images of moonlit landscapes.

The symbolists concentrated on fantasy and spirituality and on a higher dimension that lies hidden behind our visible reality. Degouve’s night scenes show a mysterious, shrouded world. They are removed from the sharpness and precision of daylight, which leaves nothing to the imagination. He painted Lake Como at the moment when the sun no longer radiates warmth or energy and only briefly still illuminates the facades of the houses on the water’s edge. The painting is immersed in many shades of blue, the colour of dreams. A mysterious light glows in some of the houses. There are no people.

Mr and Mrs Degouve also visited Venice on their journey. The night pieces he made there must have seemed, even then, somewhat at odds with the prevailing Baedeker image of a city swathed in dancing sunlight. Rather, they could have been the decor for the dwarf serial killer from Daphne du Maurier’s novel 'Don’t look now' or for the ominous sultry heat of Thomas Mann’s 'Tod in Venedig'.

Degouve at the Kröller-Müller

The Kröller-Müller Museum is showing Degouve’s night pieces – and an important selection from his whole oeuvre – throughout the summer. As yet, this summer has been far from warm, let alone sultry. But in the Kröller-Müller, at least, it is another Sweet Summer. For the seventh year the sculpture garden provides the decor for theatre, music, performances and much more. The Sweet Summer Nights are on 14 and 28 July, with a children’s afternoon on 11 August. After that, it will remain summer at Lake Como for a long time.