Cloud shepherd: a voyage of discovery

16 May 2017
-BLOG- 'Berger de nuages' (Cloud shepherd) by Jean (Hans Arp) is a real visitors’ favourite. The sculpture has stood in the sculpture garden since the opening in 1961 and was in need of a thorough conservation treatment. And with 'Arp: The Poetry of Forms' in prospect, this was the perfect time for it.

Precisely because the sculpture is so popular, it has had to endure more. It has been (unintentionally) knocked over on several occasions, leaving scratches on the sides. And while photographing a forbidden embrace, many zippers and buttons have scraped across the surface.
To preserve its sheen, the sculpture has been varnished in the past. This varnish is worn, damaged and in some places even holes (lacunas) have developed in the varnish 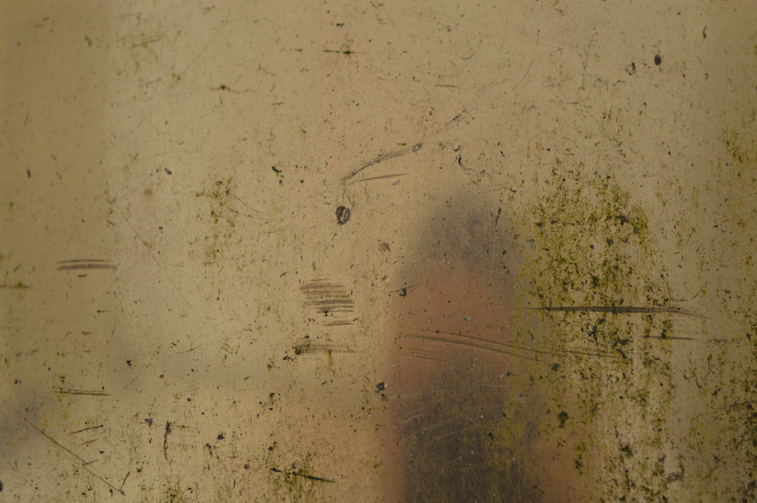 During the removal of the varnish, it soon became clear that the sculpture was covered with not 1 but 2 different layers of varnish. After testing, the varnish was removed layer by layer, piece by piece. We were pleasantly surprised when a high-gloss bronze surface appeared. Due to the old varnish, the sculpture had acquired a milky, ‘plastic’ appearance. Now you can see the beautiful, warm colour of the bronze again. 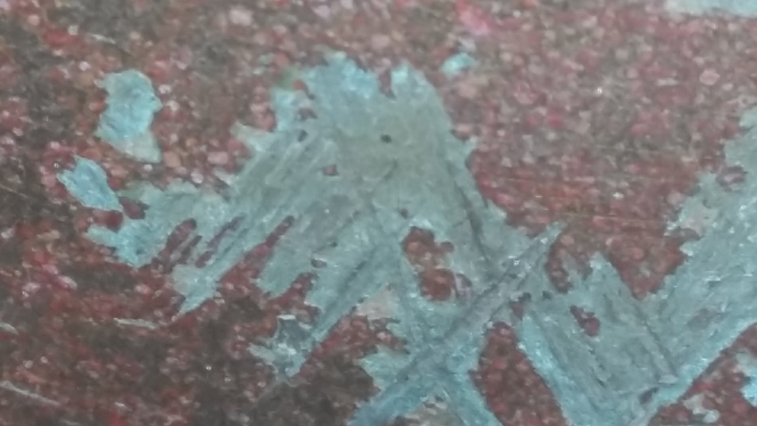 After that, we worked on the further renovation of the surface. This involves cleaning and levelling as much as possible to make the damaged areas as inconspicuous as possible. The discolouration in the lacunas was treated with chemicals that dissolve the corrosion. Where that was not possible, we removed the discolouration very carefully with small tools. Meticulous work, because the surrounding, shiny metal had to remain untouched. 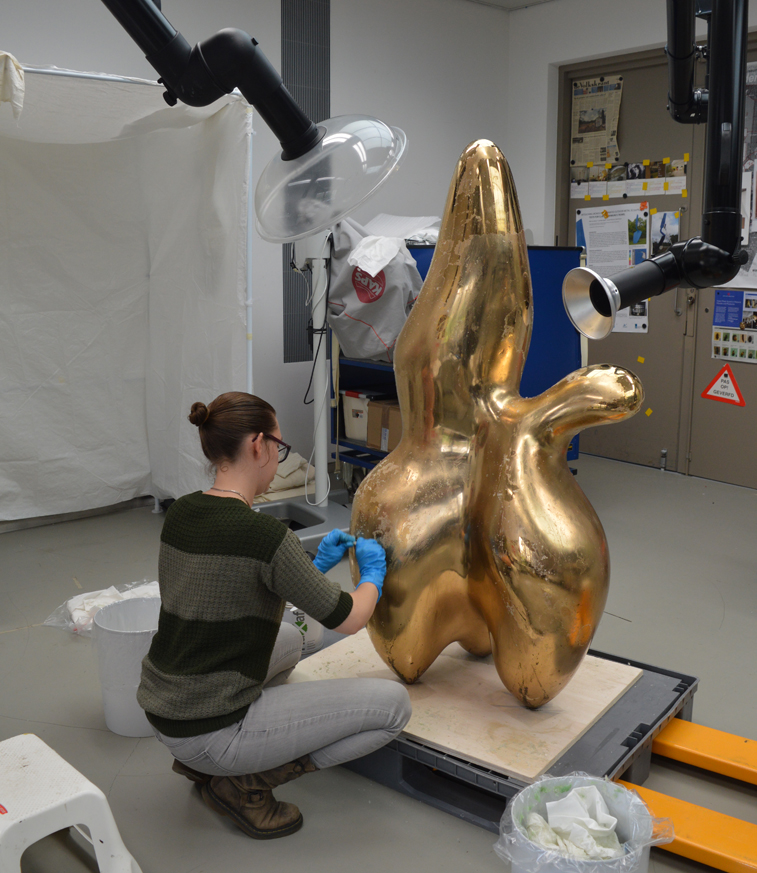 Questions about the finishing layer

In the future, Cloud shepherd will again receive a protective finishing layer. For this, answers must be found to various questions. Such as: is the shiny, reflective appearance original or did the sculpture look different in the past? Because this has long been suspected. 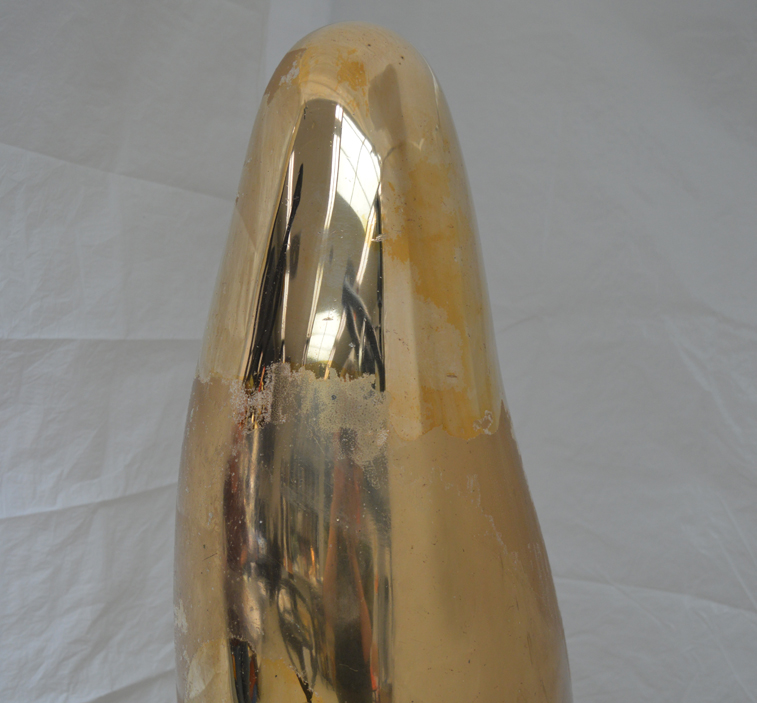 What does Arp think?

In the summer of 2016, Iris conducted research into the conservation history and similar work by Arp, such as the 3 metre-tall Berger des Nuages in Caracas and the smaller Forme Lutin, of which several versions exist. The research into Arp’s preferences and habits soon revealed that he was not at all fond of reflective surfaces, as the reflection makes it harder to see the lines in his work. The strange thing is that precisely this reflective surface has been used for about 50 years to explain the title: because the clouds reflect in the surface, but now it seems that the sculpture was once darker in colour and had a satin finish. 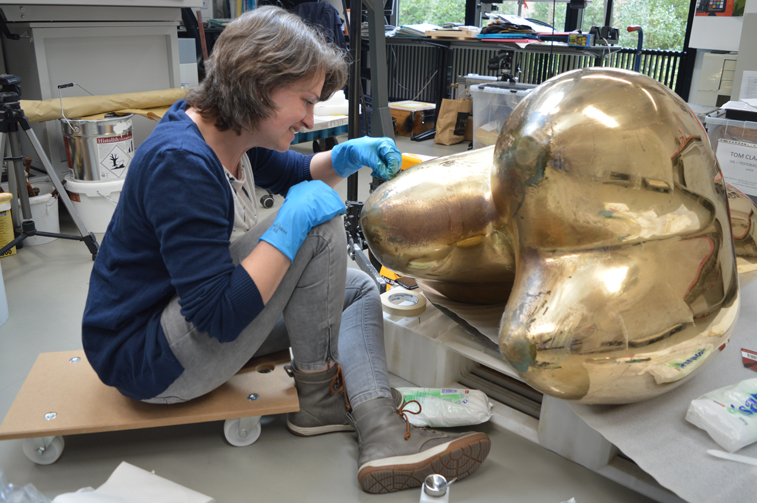 Something else was discovered. During the cleaning, Vera found the signature of the foundry: Susse Fondeur Paris. Arp preferred to have his sculptures cast there because this foundry made very high quality castings. Due to the remarkably even surface with few casting errors, we thought that the work was cast there, but now we have fantastic evidence.

The investigation went further. Because it is unnecessary to hide mistakes with high quality castings, a lighter chemical colouring, patina, can be used. We couldn’t wait to study the underside of the sculpture in the hope of finding clues there. So when we indeed found possible traces of an original patina, we all did a little dance in the studio! 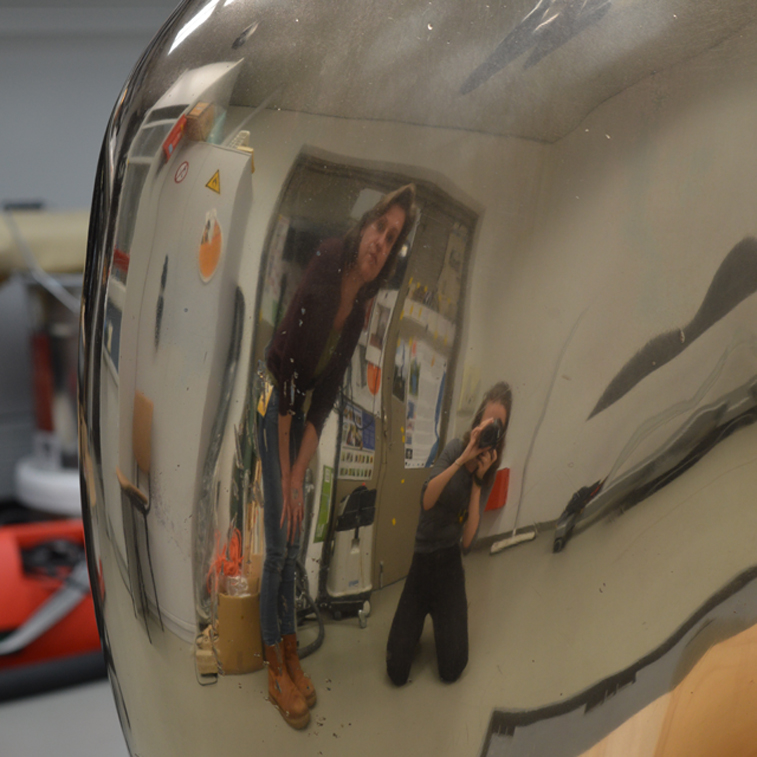 The research continues and for now Cloud shepherd stands shining in the sun again. The sculpture has been thoroughly restored and conserved, even slightly closer to its original appearance. And whatever the eventual finishing layer will be, everyone can once again enjoy Arp’s sculpture to the full. 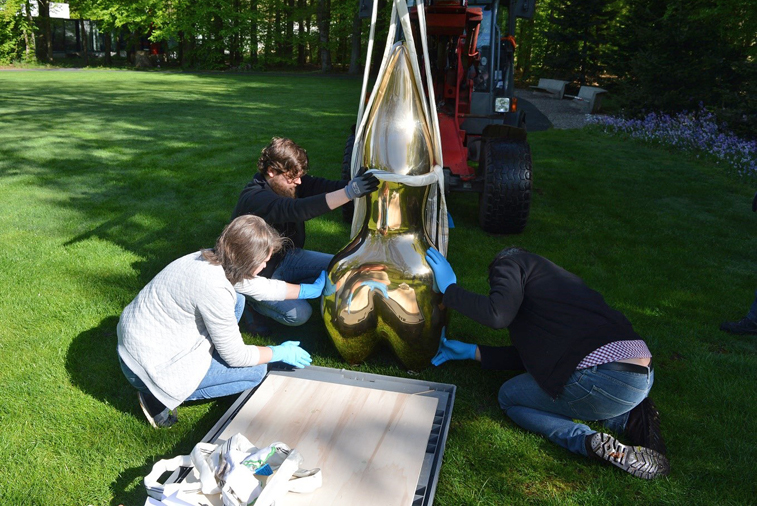 Foto's: 1 Transporting Cloud shepherd to the studio, 2 Detail of damaged varnish, 3 Discolouration, 4 Iris removes the varnish, 5 Cloud shepherd half shiny, half satin, 6 Vera during.treatment of the underside, 7 The signature of the foundry, 8 The 2 conservators reflected, 9 Cloud shepherd is back in the sculpture garden

A year ago, metal restorer Vera Bakker told us why Jean Arp's Berger de Nuages (Cloud Shepherd) had been removed from the sculpture garden. The sculpture is now back, but in a tent. Vera explains why.

Cloud shepherd is now back in the sculpture garden, but it does look different than before. Vera gives you a final update. 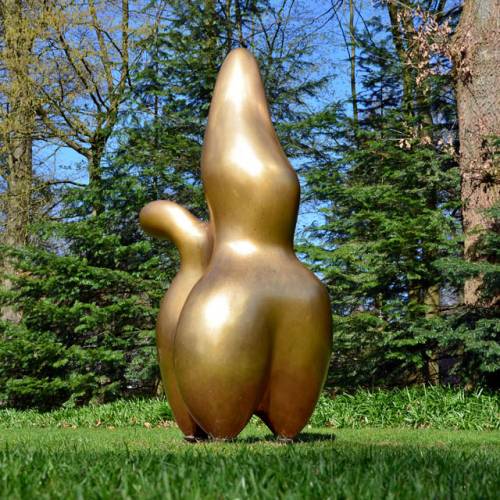 Read more about Arp's work in our sculpture garden.